To some, today’s announcement that IBM once again led the U.S. in patents in 2016 might sound as predictable as snow in upstate New York in January. After all, this marks the 24th consecutive year IBM has received the most patents. It’s what we do, right?

But to gloss over this news would be to miss the deeper points about why we patent, and what it takes to maintain a remarkable record like this one. 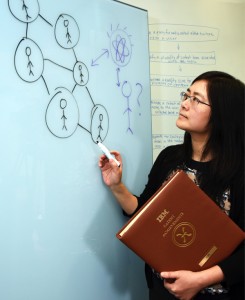 IBM inventors received a record-breaking 8,088 U.S. patents during 2016, the company’s 24th consecutive year of patent leadership. IBM’s 2016 patent output features more than 2,700 patents for inventions related to AI, cognitive computing and cloud computing, as well as thousands of patent inventions in cybersecurity, analytics and other areas. Master Inventor Yu Deng (pictured) was a co-inventor on five of the patents granted to IBM in 2016, including the milestone 8,000th patent granted on December 27 (US Patent #9,529,893) for an invention designed to search and analyze pictures, videos and other content shared on social media. (Credit: Michael Pollio/Feature Photo Service for IBM)

As my nearly forty years as a researcher and scientist at IBM have taught me, innovation is how companies survive. One key way we sustain innovation is by patenting our most valuable intellectual property.

Of course, patents ensure income vital for a company’s very survival, but a small component of this income comes through simple licensing. In IBM’s case, this enables the necessary return on one of the largest annual investments in corporate research and development anywhere.

But licensing is not the only reason we pursue patents. At IBM, we patent above all to protect our ability to complete the innovation lifecycle. What begins as an “aha moment” is often the result of years of prior investment, perhaps in the hundreds of millions of dollars. Preserving IBM’s freedom of action to monetize that outcome is critical if we are to continue to produce breakthrough after breakthrough in technology and science.

The impact of innovation on society becomes clearer when you consider that more than a quarter of IBM’s patents granted last year – more than 2,700 of them – were for inventions related to the rapidly emerging technologies of artificial intelligence, cognitive computing and cloud computing.

These technologies hold the key to addressing some of greatest challenges facing society today — everything from developing more effective cancer treatments, to promoting greater financial inclusion, to dramatically reducing toxic levels of air pollution in places like China and India. Similarly, they represent the core assets required to create the future of information technology.

The examples just mentioned are but a small subset of the many ways in which IBM’s cognitive computing platform is currently being applied. By patenting the innovations foundational to this technology, we can continue to integrate it without interference into solutions that best serve the needs of our clients and society.

We can also, when necessary, leverage our extensive patent portfolio to shield open source and other developer communities in order to allow them to grow. A prime example of this was IBM’s decision in 1999 to support the open source Linux operating system on which programmers and developers share and evolve code. Then in 2005, we took the unprecedented step of making 500 of our software patents freely available to anyone working in this community.

Currently, IBM leads or participates in many open source projects in addition to Linux, where we provide liberal access to technology patents and code to hundreds of different partners. This stands in stark contrast to the narrow, self-interested strategy of purely defensive or blocking patenting. Those who adopt this strategy seek to acquire patents competitors require and then refuse to license it to them, or offer crippling financial terms, or simply choose to litigate the matter to the detriment of all.

IBM’s long and deeply held belief in ethical and responsible patenting has one overarching goal: to share the fruits of our unmatched culture of innovation as widely as possible. The innovations produced by generations of IBMers on behalf of our company and our clients are our single greatest asset as a company. We have a profound responsibility to protect this asset through patenting for the sake of scientific, technical, and societal advancement.

Also read, Exploring the Brain in Search of New Ways to Combat Disease.

Exploring the Brain in Search of New Ways to Combat Disease