IBM’s work in cognitive computing emerged as a major factor among the patents awarded to the company by the US. Patent and Trademark Office. More than 800 of IBM’s 7,355 2015 patents are related to cognitive computing, a 52% increase from the previous year.

Last year, IBM announced that it has realigned its entire business strategy around the promise of cognitive computers, which can learn, reason, and efficiently process diverse data types all while interacting with people in natural and familiar ways.

IBM’s leaders believe cognitive computing will have a profound impact on business and society, helping people to make better decisions in their personal and professional lives, democratizing expertise, and transforming industries and professions.

Here are some highlights among last year’s cognitive computing innovations:

Creating machines that mimic the brain: Conventional computers are good at math, but they can’t tell the difference between a tree and a truck—at least, not without using a truckload of computing power. A invented a new kind of processor chip that draws inspiration from the structure and function of the human brain while exploiting creative possibilities in modern technology — to learn and adapt on the fly, and is 10,000 times more energy efficient than conventional chips. (Patent US8977583)

Handling information overload: In this era of big data, it’s essential for computers to crunch huge quantities of information about everything from Tweets to hail storms—often in real time. A team invented cognitive Big Data technology that makes it easier to monitor extremely high volumes of data shooting across networks and automatically learn to spot patterns that might signal malware attacks and other cyber threats, which can be further investigated and acted upon by security pros and network systems. (Patent US9032521) 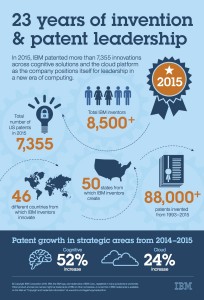 Giving machines good judgment: How does a computer know which bits of information on the Internet are spot on and which ones are pure bunk. An invention filters sources of information and determines which of them are most relevant and credible. As result, a cognitive computer can decide which information should be given the most credence when it makes recommendations to humans. (Patent US9087304)

Helping computers learn from us: Unlike conventional computers, cognitive systems can learn from experience. A team invented technology that helps computers understand language by interacting with humans. The goal is to help computers figure out whether they’re interacting with a human or a machine. The invention might be used by a Web site that sells tickets to events—to weed out bots controlled by scalpers. (Patent US9146917)

Helping machines understand emotion: For most of the history of computing, we humans have had to play by the machines’ rules—mostly typing or pushing buttons to make ourselves understood. In the cognitive era, machines will increasingly listen and talk to us. A group of scientists from IBM Research’s China lab patented a system that helps machines interpret emotion-laden words so they can converse with us in more natural ways. (Patent US9117446)

In addition, IBM inventors are focused on innovations that will help advance cloud computing. For example:

Helping your cloud to run faster: One advantage of cloud computing is that resources can be provisioned from all over the planet. IBM computer scientists have developed and patented a way to map available resources and determine the shortest network routes between them, and to the end users. That way, the best combination of cloud data centers can be used for each client–minimizing delays in receiving and sending data. (Patent US8972986)

Managing super-efficient clouds: IBM inventors have developed a way for clouds to request extra computing resources from other clouds to manage intensive workloads that have extra capacity to share. At the same time, clouds that have sufficient resources available can also alert other clouds when high profile events are coming up. This allows computing tasks to be completed more quickly and efficiently. (Patent US9009722)

IBM inventors are also focused on innovations that will help transform industries. For example:

Effective communications at international travel venues: Travel hubs such as international airports need to get information to passengers that speak different languages as quickly and efficiently as possible. IBM inventors have come up with a way to detect which languages are being spoken most often among of travelers. Announcements are then translated and broadcast in those languages. (Patent US9093062)

Improving patient care through machine learning:  Diagnosing an illness can be very challenging and subtle differences in patient symptoms can significantly affect a diagnosis and patient care options. IBM inventors have patented an invention that identifies algorithms that have had the best rate of success for diagnosing a particular class of medical conditions in the past, and then applies these algorithms to help doctors diagnose a current patient’s condition. (Patent US9171478)

To learn more about the new era of computing, read Smart Machines: IBM’s Watson and the Era of Cognitive Computing.

3 Ways to Embrace the Internet of Things in Your Business