The Bell Prize: Unlocking the Secrets of the Earth’s Crust

We’re on the cusp of a new era for science and computer science. People are able to measure natural phenomena more precisely thanks to all the new sensors and the Internet of Things. We can handle immense amounts of data thanks to new data management technologies. And we’re producing ever more sophisticated algorithms and computer simulations. Wrap it all together and it means we are on the path to understanding nature more deeply than was ever possible before. 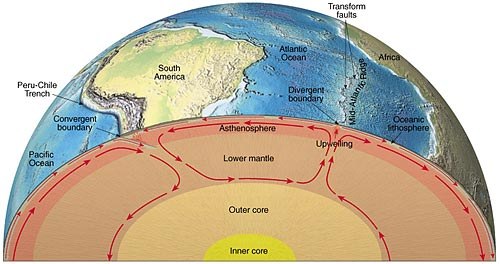 A group of scientists from the University of Texas at Austin, IBM Research, New York University and the California Institute of Technology that I’m a part of pushed the needle of progress forward with our realistic simulations of the dynamics of the earth’s  mantle and crust. For our work, we just yesterday received the Gordon Bell Prize, one of the top honors in the computer science field.

The group—spearheaded by Omar Ghattas of the University of Texas—created a technology tool that geologists and seismologists can use to improve their understanding of the forces that are behind the origin of earthquakes and volcanoes. But, more broadly, this collection of advanced algorithms and know how will enable scientists in multiple fields to make new discoveries and make it possible for industries to greatly reduce the time it takes to invent, test, and bring new products to market—including, for example, new materials and energy sources.

Our focus was on mantle convection, the physical process responsible for the thermal and geological evolution of the planet, including plate tectonics—the movement of pieces of the earth’s crust. Here’s a paper about our work.

The project combines advances in mathematics, in algorithms, and computer science demonstrated in scaling simulations to run super-efficiently on two of the most powerful high-performance computers in the world. Our initial runs were made  on a computer at the Juelich Supercomputing Centre in Germany and then we further scaled it up on Sequoia, a machine made by IBM that’s owned by the U.S. Lawrence Livermore National Laboratory. Sequoia possesses 1.6 million processor cores capable to a theoretical peak performance of 20.1 petaflops.

This project got started in an interesting way. Two years ago, a group of IBM and university scientists won the Bell prize for our work simulating the behavior of clouds of bursting bubbles. Afterwards, my colleague Costas Bekas and I spoke to Omar, and he suggested that we combine forces to tackle the earth mantle convection problem he was working on. So we did. Once again, like with the bubble project, we involved scientists with a wide range of expertise from multiple institutions. A single organization could not have accomplished this. We needed a wide variety of skills and a spirit of open collaboration.

A key element of our system came from my IBM Research colleagues Cristiano Malossi, Costas Bekas, Yves Ineichen and Peter Staar, who have expertise in mathematics, physics, computer science and fluid dynamics. 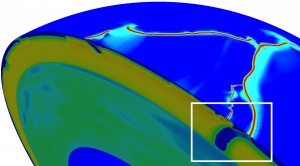 A view of the Marianas fault from the Earth mantle and crust model.

Ours was an extremely difficult problem. We had to deal with an immense amount of data about the conditions in different areas of the mantle and crust—including temperature, position, movement and viscosity. This consisted of a problem with 600 billion non-linear equations, which can only be solved on the largest supercomputers. In addition, we had to adapt the resolution at which were measuring and simulating conditions depending on the geometry of different areas of the mantle and crust. To handle all of this complexity and produce results at the precision we wanted, it was necessary to approach the problem differently and re-think most of the algorithms.

Rather than using simple explicit schemes, which are easier to scale on large supercomputers but at the same time lose in accuracy, the team developed an innovative implicit solver, which allowed us to simulate mantle convection with an unprecedented level of accuracy. Indeed, the quality of resolution is essential when you’re studying the position and movement of the earth’s tectonic plates.

Understanding mantle convection has been named one of the “10 Grand Research Questions in Earth Sciences” by the U.S. National Academies. We hope our invention provides earth scientists with a valuable new tool to help them pursue this grand quest.

How Digital-Era Sports Franchises Pump Up the Fan Experience 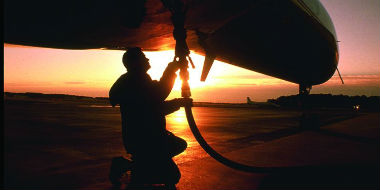 Fueling the HPC Transformation with AI

As the annual Supercomputing conference celebrates its 30th birthday in Dallas this week, I’m reminded how far supercomputing has come, and how exciting the HPC industry is right now. With the Big Data boom, the immense amount of information represents tremendous opportunity for researchers who have new fuel for their projects. But it also provides […]