Long before Silicon Valley took root on the West Coast, New York City was the epicenter of life-changing technical innovations, not the least of which included electricity, the telegraph, automatic punch card systems, satellites, and high speed computers. 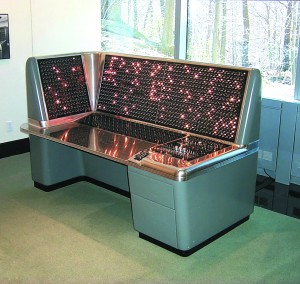 IBM’s Selective Sequence Electronic Calculator, which operated from 1948 to 1952, had 12,500 vacuum tubes and more than 21,000 relays. The first computer to store data, the SSEC calculated positions of the moon and planets.

An exhibition at the New-York Historical Society (NYHS) will bring that history to life with the launch of “Silicon City: Computer History Made in New York”. But unlike traditional museum exhibits, Silicon City will juxtapose past with present, while keeping an eye on the future.

Running from November 13, 2015 to April 17, 2016, Silicon City will demonstrate the changing forces of commerce and technology that have given rise to technical innovation from as far back as the 18th century to the present. The many measuring, counting and calculating devices on display make clear our increasing need to generate, share and manage data, more easily, faster, and with greater security.

The history of computing can be described in two distinct eras – Tabulating and Programming. The Tabulating Era (1900s-1940s) consisted of single-purpose mechanical systems that counted, using punched cards to input and store data. The Programming Era (1950s-present) shifted to electronic systems that rely on software coding to tell the computer what to do. Everything we now know as a computing device – mainframe, PC, tablet and smartphone – is a programmable computer.

Today we’re at the dawn of a third computing era – Cognitive. Pioneered by IBM Watson, cognitive is forging a new partnership between humans and computers that magnifies and scales human expertise. Because of its ability to ingest and make sense of vast quantities of data, ‘see’ through sensors and speak multiple languages, Watson can augment human intelligence to improve decision making.

For example, more than a dozen leading cancer institutes are collaborating with Watson to accelerate the ability of clinicians to identify and improve treatment options for their patients. Doctors and researchers apply Watson’s advanced learning and reasoning capabilities to reduce from weeks to minutes the ability to translate DNA insights. They can understand a person’s genetic profile and derive hypotheses from the huge body of medical literature to personalize treatment options.

We are seeing similar breakthroughs in social services, banking, retail, travel and many other industries.

The NYHS celebrates the great innovations that have augmented mankind’s ability to better understand and act on the increasingly complex challenges of society. We believe cognitive computing is the essential next step. With IBM Watson based in Astor Place, Manhattan, New York lives on as a hub of innovation that will continue to shape our lives for years to come.