Mayor of Johannesburg: Our Future is Green and ‘Ecomobile’

In December, representatives from 196 countries will attend the 21st meeting of the Conference of the Parties to the United Nations Framework Convention on Climate Change (COP21) in Paris. With the goal to agree on a new legally-binding framework to limit greenhouse gas emissions, it is set to be the most important summit on climate change in years.

South Africa hosted the COP meeting in Durban four years ago so we are well versed in the significance of climate change. I personally see this as one of the most pressing issues of our generation. Temperatures across South Africa have risen considerably over the last 60 years and rainfall patterns are clearly shifting. With our large coastline, numerous low lying regions and important agricultural industry, our country is particularly vulnerable to the effects of climate change – today and in the future.

Here in Johannesburg, we recognize our important leadership role in sustainable and environmentally friendly growth. As a mayor of a city and a citizen of Johannesburg, I have an official and personal interest in this vision. I strive for a city where people and businesses are in harmony with the environment. Where people can live, work and play with minimal impact on our air, green spaces and natural ecosystems.

Hence the concept of ‘ecomobility’ which promotes public transport and pedestrian-friendly urban environments as the foundation for long-term sustainable growth. As a way to demonstrate our commitment to this vision and test-drive new transportation initiatives, the City of Johannesburg recently hosted the month-long EcoMobility World Festival 2015 in the Sandton CBD. During the month of October, we engaged citizens, businesses and government departments in a joint effort to become a more ‘ecomobile’ city. We increased services across a range of public transportation systems and encouraged people to walk, cycle, car-share and use public transport as opposed to private vehicles. The results were positive with fewer cars, reduced congestion, thousands using park and ride facilities in and around Sandton and an almost 10% increase in the use of the Gauteng Province Gautrain system. 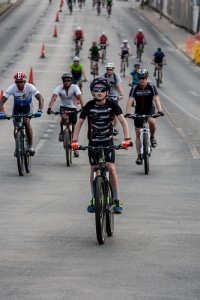 A key part of the vision for ecomobility in Johannesburg is engagement with citizens who have an unquestionable right to shape the future of their city. For that reason, it is crucial that we have an ear to their voice and understand their views, concerns and ideas. One of the most accessible ways to tap into public opinion is through social media through which people constantly share their experiences and talk about the things that inspire them and bug them. While much of this information is open and easily accessible online, it is confusing in its scale and form. How does a city government understand the pulse of its people across a myriad of social media channels with vast amounts of real-time data which changes second by second?

It was with such a difficult task that the city recruited the assistance of one of the world leaders in Big Data: IBM. IBM has the world’s largest industrial research organization and recently chose Johannesburg as the home of one of its global research labs. During Joburg’s EcoMobility Festival, IBM’s data scientists used the company’s world renowned Watson cognitive computing system to ingest and understand about 18,000 tweets from over 6,000 Twitter users. They provided the city with regular updates about public opinion on ecomobility so we could keep track of what people were saying and thinking. Insight from IBM Watson told us that the overall sentiment towards Ecomobility was 57% neutral, 25% positive, 7% negative, with the remainder being either ambivalent or not expressing a clear opinion. 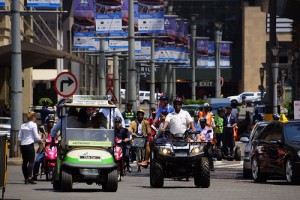 On the positive side, many people expressed their joy at rediscovering the simple pleasure of walking. Others talked about reduced commuter stress when taking the city’s Gautrain service and new Metro buses. On the negative side, some people expressed frustration at the high volume of users of public transport and the strain on the city’s temporary park and ride schemes. Building construction sites were perceived to be a safety hazard for pedestrians and cyclists. Some saw temporary cycle lanes as a cause of traffic delay – others complained about their absence. Some questioned the safety of walking.

We do not shy away from constructive criticism and rather see this insight as crucial for creating an inclusive, sustainable and harmonious living environment for future generations. In fact, citizen engagement is at the heart of our new EcoMobility Declaration which we will take to the COP21 conference in Paris next month. We are calling on government officials and citizens from around the world to support it and endorse a future based on low-carbon urban transportation systems. 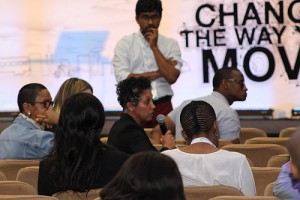 Ecomobility is not new to Johannesburg and we have already invested billions into new public transportation systems and transforming our infrastructures. However, we are now surer than ever that ecomobility is the right future for our city. We have a bold vision for sustained economic and demographic growth with exciting plans for mixed-use developments based on high-density accommodation, office buildings, retail developments and opportunities for leisure and recreation. That way, the people of Johannesburg will live closer to their workplaces without having to rely on private motorized transport. Safe, affordable and convenient buses, cycling and pedestrian activity will eventually replace the carbon-burning private vehicles of today.

While we can feel proud about what we have already achieved to take us nearer to our vision of a greener and more harmonious Johannesburg, we recognize that we are at the beginning of the journey and much remains to be done. One thing is key – we are committed to listening to our people to guide us. With the help of technology we are already listening to the citizens of Johannesburg and they are becoming part of the conversation. We are bringing them into the decision making process to ensure that we have a shared vision for the future of the world-class African city that Johannesburg aspires to be.

How Cognitive Computing Will Revolutionize Banks and Financial Markets