The creation of the IBM Advanced Control System 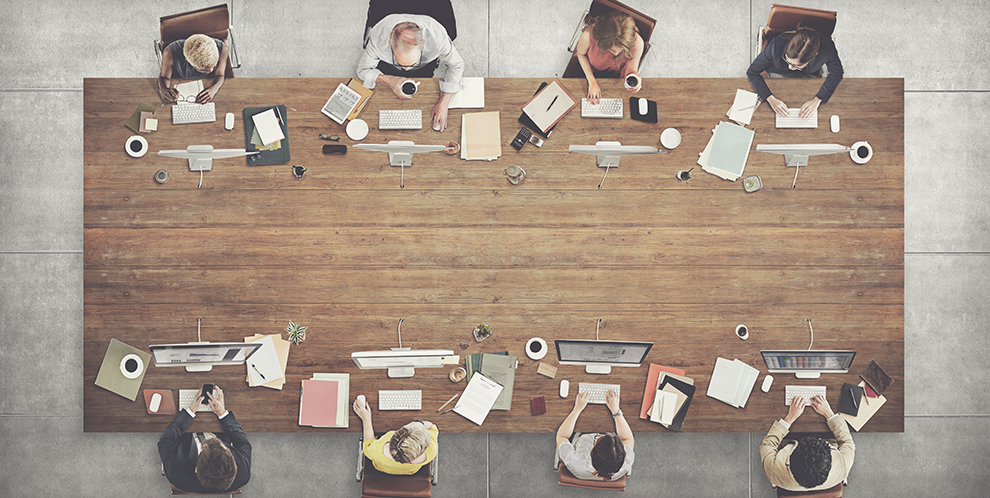 This is the story of a global IBM process control system, conceived in Canada 48 years ago, that incredibly is still serving customers successfully.

In early 1972, IBM Canada received an RFP from Imperial Oil Limited (IOL)/Exxon for a process control system that would have the capability to operate IOL’s ever larger and complex refinery systems, like the one they were going to start up at Edmonton, Alberta. Given IOL’s requirements, IBM’s then-current process control system solutions (1800 DAIS system, developed in Sarnia in 1968 and the IBM 1800 system at Ontario Hydro in 1971) could not measure up. A new solution was required, one requiring new technology and a more robust design.  A plus for IBM was that IOL had confidence in IBM’s ability to implement process control systems, as was demonstrated at IOL’s Sarnia refinery.

>>Take a tour of the modern mainframe

Doug McWhirter recalls: “John Buchan’s role was key to our proposal. When presented with this RFP, IBM had little relevant experience in 1972 with complex, commercial, fixed price, turnkey projects. It was tempting to reject this as representing an unacceptably high-risk opportunity. John was the driving force which pushed the company to overcome technical, financial and contractual obstacles.”

Bernie Kuehn, IBM Canada Sales VP, spearheaded this initiative, with support from IBM Canada’s ORC (Operations Review Committee), which included Jack Brent, Lorne Lodge and Carl Corcoran. Art Caston recalls: “Bernie Kuehn made the strong point, after the loss to Univac at Ontario Hydro, that to be successful in future bids of this type, it would require forward pricing of the software development over multiple future prospects.”

IOL and Exxon Research & Engineering (ER&E) selected the ACS proposal in September 1972, over competitive bids from Foxboro and Honeywell. The ACS solution was to be deployed at the IOL Strathcona refinery being built at Edmonton, Alberta.

Gerry Ebker, retired Chairman and CEO of FSD recalls: “Vin Learson was Chairman of IBM Corp. and also on the board of EXXON Corp. at that time. Vin had said that every time EXXON had an IT opportunity, IBM lost. He directed that the next time there was a bid opportunity, IBM had better win. When the automation of refineries in Edmonton, Canada came up for bid, IBM bid a fixed-price turn-key solution and won.”

The ACS solution was visualized as a process control system operating on dual IBM mainframes with IBM front-end processors offering high-speed online input/output data streams to and from industrial plant equipment in real time.   ACS was designed to automatically perform process control functions to control thousands of plant process operations, with hundreds of operations being controlled each and every second. The IOL Strathcona installation employed a pair of System 370/145 mainframes in order to provide a backup/failover capability, ensuring continuous operation in case the primary mainframe failed. Color graphic terminals provided plant operators with a variety of vivid and easy-to-use “live” displays from which to monitor/control the plant. The diagram below broadly illustrates the ACS hardware components as initially installed at Exxon’s Strathcona refinery. 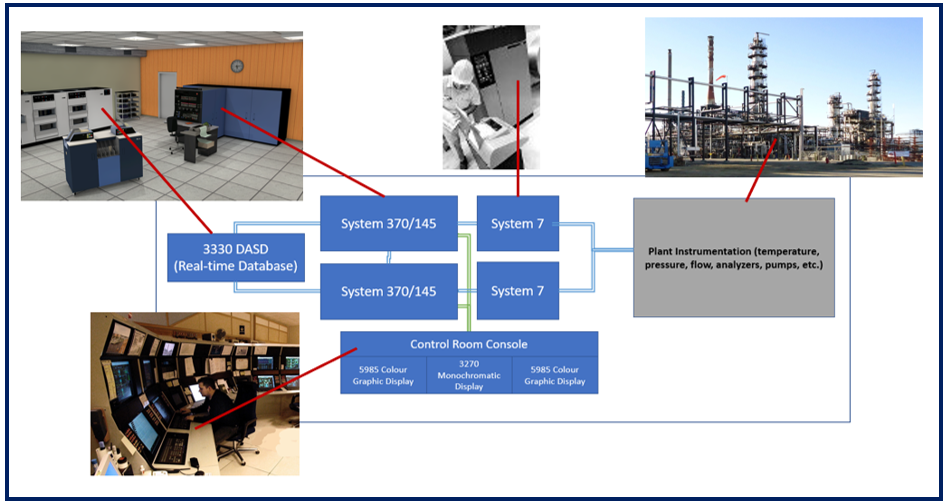 In June 1973, Esso Antwerp and IBM Belgium joined the ACS project. This added a second Exxon refinery installation and along with it came additional requirements.

Brian Finn recalls: “Following Ralph Pfeiffer’s meeting with Exxon senior management, a revamped implementation plan, covering each of the ACS software components was developed and agreed with the parties involved – A/FE, EMEA, FSD, ER&E, IOL and Exxon Belgium.  From that point on, the drive to complete the project on-time and on-budget began in earnest.”

The ACS software development team was organized across several functional components. The sub-teams worked together closely to bring the following software components into a single integrated system:

Roy Lieber, Exxon Research and Engineering manager, remarked on development of the Oil Movements and Storage software: “Probably most noteworthy about the project was that Exxon had significant experience in the process control portion, but the Oil Movement and Storage (OM&S) aspect was something a bit more challenging. Not to say that the PUC development was a piece of cake, but the potential problem areas were better known, and the debugging became the larger problem.  OM&S however was relatively new technology, and the Path Select a large element to be perfected. Today, of course, the equivalent of Path Select is trivial, but 46 years ago was another story.” 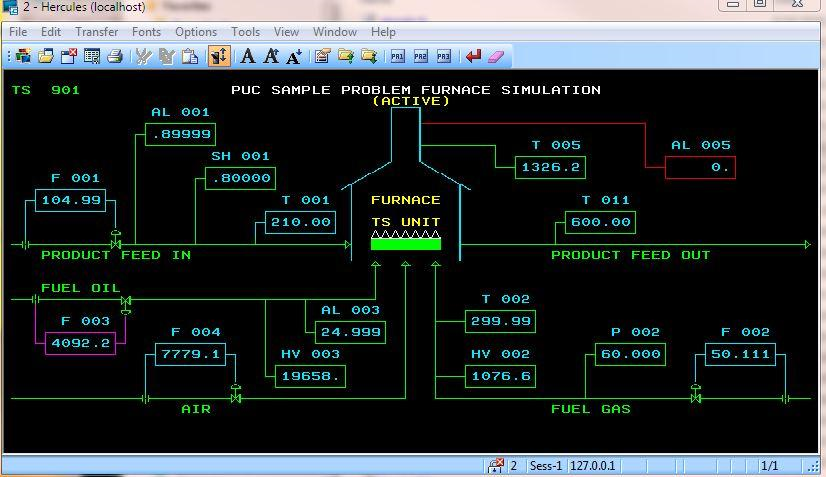 The ACS installation faced a stringent acceptance test, where the system had to run without failure for 30 consecutive days. Gerry Kirk remembers: “As the ACS installation progressed, the software became more and more stable.  The 30 day no-fail target looked to be within grasp, when the ACS system unexpectedly crashed on the 26th day due to a lack of virtual storage. The irony was that the storage problem was caused by the OS/VSI operating system.”

Mike Burns, IBM Western Region VP at the time of the Strathcona install, recalls: “The unique thing that stood out in my mind till today was not the hardware or the software, rather it was the culture of our client EXXON. The professionalism and integrity that they demonstrated in every situation was really admirable.”

Mauro Castelpietra recalled his ACS development and installation experience: “Failure was not an option. In addition to supporting the Antwerp installation, we developed several ACS enhancements and diagnostic tools which benefited many subsequent ACS installations.” Mauro went on to build a tremendous career around installing and supporting ACS throughout the world.

ACS also went on to play a key role in education, where IBM partnered with universities (Waterloo, Purdue, Tulane, Notre Dame, etc.), to make ACS installations available to their chemical engineering departments and students. Gerry Sullivan, with the University of Waterloo Chemical Engineering Faculty, promoted ACS at his and other universities in North America.

He remembers ACS: “In the past, process control courses were very theoretical and the methodology could only be applied to very simple processes. ACS allowed us to support our theoretical process control lectures with real time simulations and control of typical complex petrochemical processes. Industry applauded the new approach and were delighted with the knowledge and practical skills exhibited by our graduates.”

The ACS project was favored with exceptional leaders, who navigated the ACS project to be greatly successful. Three of the leaders went on to contribute to IBM’s global growth:

In July 2020, a few of the original ACS team members, from 1975, got together for a virtual Zoom reunion. Once the participants from Canada, USA and Australia adjusted to their aged appearances, stories flooded back of the “good old days” some 45 plus years ago. The birth of the Advanced Control System has formed many lasting memories. Memories of colleagues, friendship and achievement, enveloped by something special called ACS. More virtual reunions are planned for the fall, with larger global participation. 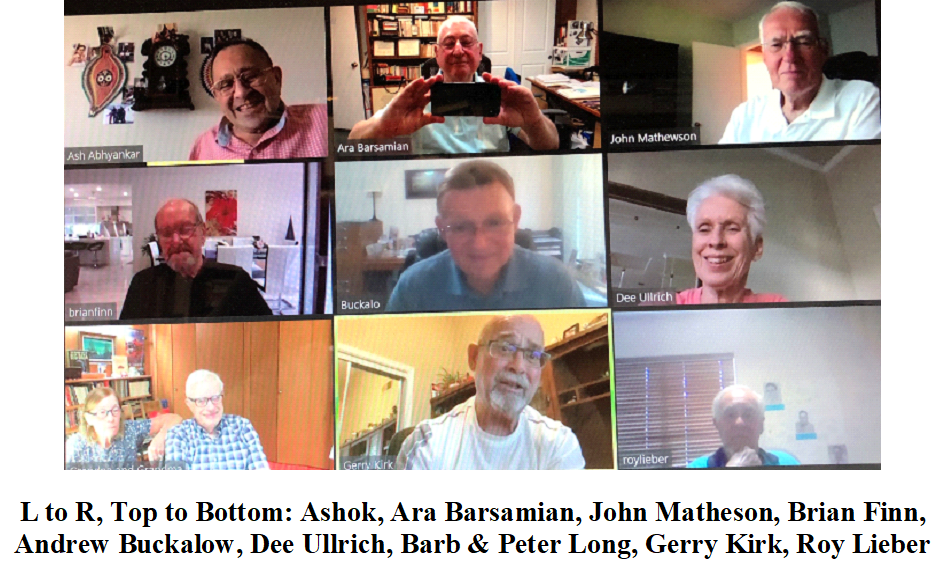 Many thanks to those that made this article possible, especially Ash Abhyankar and Brian Finn for their valuable input, reviews and corrections[1]. And we fondly remember those who contributed to ACS and have passed away — they will live on in our hearts.[2]

>>Take a tour of the modern mainframe.

Gerry Kirk is a 1999 retiree from IBM Canada, now residing in Scottsdale, Arizona.

The unbearable lightness of being: mainframe on...

Why having full control of your digital identity...