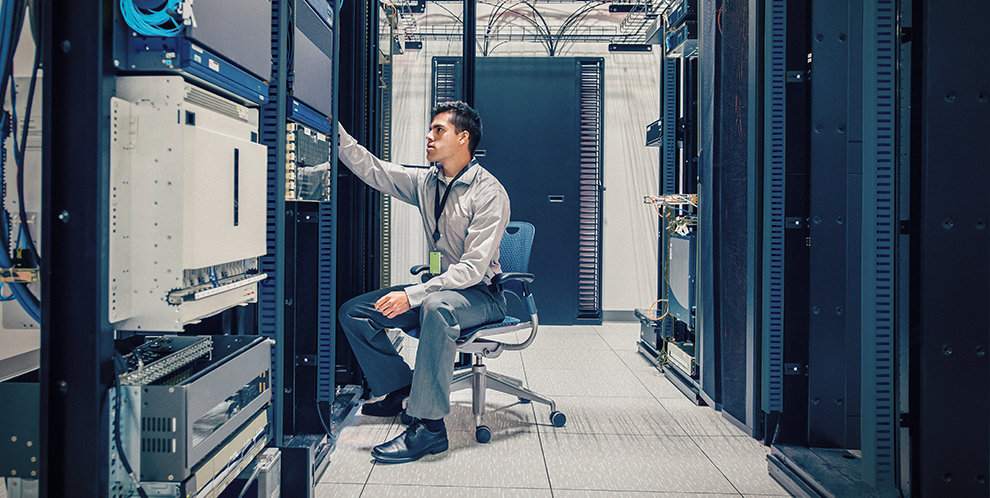 Who could have predicted the success that Linux® would achieve when Linus Torvalds introduced its first release in 1991? Indeed, it could be argued that Linux has become the most popular operating system on the planet given that it runs on virtually every compute platform in use today. Its ubiquitous and portable nature enables organizations everywhere and of every size to leverage open standards and open-source community collaboration while exploiting architecture-specific attributes. Increasingly, organizations are choosing the IBM Power Systems™ platform over x86 to run their enterprise Linux workloads to gain dramatic IT cost savings.

Both IBM® Power® processors and x86-based servers have made performance improvements over time. However, data from multiple sources[1] show that while x86 servers may have increased in overall size, capacity, and system performance, the per-core performance of x86 multicore CPU offerings has remained relatively flat. In contrast, the IBM Power processor has increased its per-core performance by 35% on average with each new generation or technology release. For many Linux-based software packages, subscription and support licensing is typically priced per core (or socket). Reducing the number of required cores to run those packages can significantly decrease software costs. For a large European telecommunications company comparing Linux web application and database workloads on Skylake x86 blades and Linux on an IBM Power System E980 server, our analysis found that for every IBM POWER9™ core, the x86 solution required 10 Intel® Xeon Skylake cores. This core differential for the Power E980 solution would save the company $7 million over five years with 74% of this savings based on reductions in core-based licensing subscription and support costs for the systems software, web and database (Figure 1). 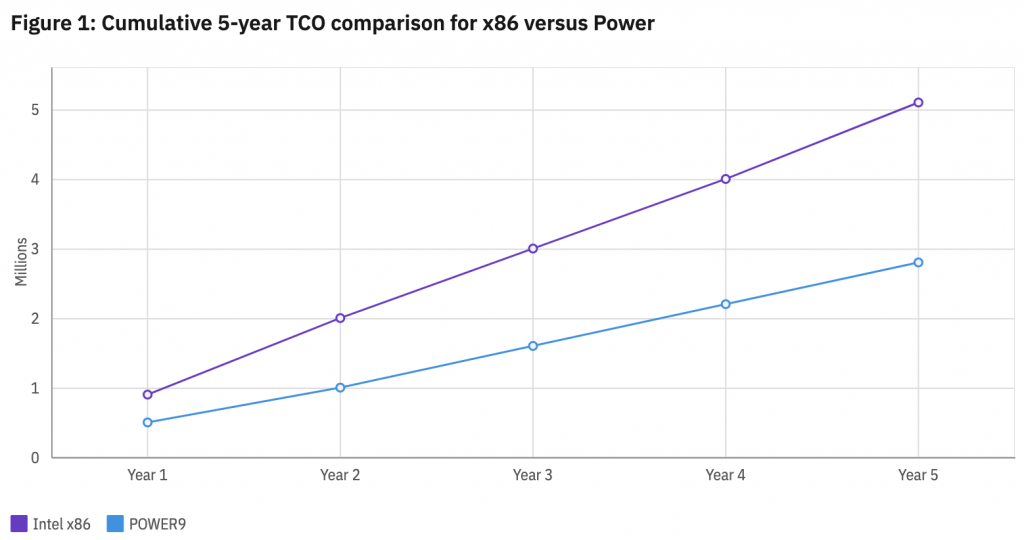 Another advantage of Linux on Power and its capability to do more work with fewer resources is observed when examining space and electrical costs[2]. A large genomics research facility was able to reduce its physical footprint from 89 Linux on x86 servers to four Linux on IBM Power System AC922 NVLink-enabled GPU systems. The space savings was 1,586 square feet or roughly 340 rack units, while annual electrical usage was reduced by 558,000 kilowatt hours, equating to an annual cost savings of $500,000.

The Power architecture supports superior performance and lifecycle longevity for Linux workloads. Assessments performed by the IBM IT Economics team found that most Power users refresh their servers once every four to five years while the customary refresh cycle for x86 users is once every three to four years. Over 10 years, that translates to a 33% lower refresh cycle for Linux on Power than for Linux on x86. This results in decreased business disruptions and technology change-out costs such as planned outages, systems administration and labor, temporary parallel operation and large step increases in software and hardware maintenance (Figure 2).

In the 2019 ITIC Global Reliability Survey, 88% of survey respondents indicated that the cost of a single hour of downtime now exceeds $300,000 ($5,000 per minute). For an IT department refreshing just 10 servers within 60 minutes, that cost of replacement would be $3 million. Linux on Power has a 33% lower refresh cycle, which could save an IT shop $1 million or more in refresh costs.

All systems are at risk of security threats and implementation vulnerabilities. The IBM Power processor minimizes these threats with the highest level of security in the industry by using the same security design principles with Linux on Power as with IBM Z®. The POWER9 systems also use accelerated encryption built into the chip so that data is protected in motion and at rest. IBM PowerVM®, the underlying, firmware-based virtualization layer that’s standard with POWER9 systems, has zero reported security vulnerabilities, according to the U.S. government’s National Vulnerability Database (NVD). VMware®, a common hypervisor for Linux on x86, had 188 exposures reported on the NVD database over the last three years alone. According to the ITIC survey mentioned above, in 2018, Linux on Power users experienced a maximum of two minutes of unplanned downtime per server per year, or essentially 99.9996% uptime. Linux on x86 users experienced anywhere from 2.1 to 47 minutes of unplanned downtime per server, per year within the same time frame. This equates to as much as a 235% advantage for Linux on Power in terms of unplanned downtime, or $235,000 in savings per server, per year[3].

Ready your workloads for hybrid and multicloud

For cloud computing users, IBM Linux on Power is leading the way for mission-critical applications on hybrid and multicloud environments with the IBM acquisition of Red Hat®. Red Hat supercharges IBM Linux on Power capabilities with the addition of the Red Hat OpenShift® family of container software development and management tools. Recognition within the cloud and open-source communities using Red Hat has enabled IBM to provide integrated Power processor-based cloud offerings and IBM Cloud Paks® with notable cost savings. An example is SAP HANA® on IBM Power Systems virtualized in the IBM Cloud®. This Linux on Power cloud solution provides the benefits of running mission-critical SAP HANA on Power while tapping into the flexibility, reliability, security and performance advantages of Power to reduce IT costs.

An IBM IT Economics cost analysis for a large managed IT service provider in Latin America found cumulative cost savings over five years of running SAP HANA on Linux on Power versus Linux on x86. For this provider, the largest savings are due to significantly lower costs for networking, storage and compute hardware. In a separate analysis, Forrester® found that the average Power user running SAP HANA on Linux could save $3.5 million over a three-year period compared to Linux on an alternative hardware platform such as x86.

When making a platform selection to host Linux workloads, examine the technical and financial benefits of IBM Power Systems. For many organizations, Linux on Power is the top contender for the job.