In June 2019 IBM Quantum announced the expansion of its quantum computing efforts to Africa in a new collaboration with the University of the Witwatersrand (Wits University) in South Africa. Wits University became the first African academic partner in the IBM Quantum Network and a gateway for academic collaboration across South Africa with 15 additional universities that are part of the African Research Universities Alliance (ARUA). 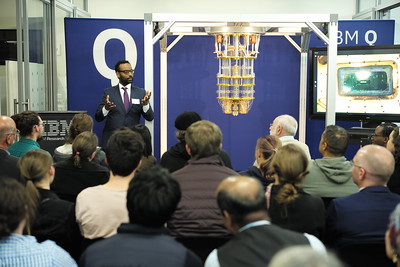 One of the groups responsible for some of this progress is led by Prof. Mark Tame at Stellenbosch University. While the town of Stellenbosch may be well known for its surrounding vineyards, on campus, Tame’s students Unathi Skosana and Conrad Strydom are focused on testing small-scale quantum algorithms to understand the limitations of quantum bits or qubits due to noise and imperfections. Prof. Tame hopes that this work provides some answers about what is needed in processor performance for scaling up the algorithms for eventual applications in quantum chemistry for tuberculosis and HIV drug development.

In another project, his student Hjalmar Rall is using IBM Quantum processors, over the cloud, to generate quantum resources (entangled states) and perform quantum operations useful for quantum networking protocols. The goal is to look at approaches that may help in developing South Africa’s future quantum communication infrastructure.

More than 1,300 kilometers inland students at Wits University in Johannesburg, which shares a campus with IBM Research, are also accessing IBM’s quantum computers via the cloud. Under the supervision of professors Ken Nixon and Krupa Prag, and part of the recently approved “WitsQ: The Wits Quantum Initiative,” students have a number of projects looking to address South African challenges, many of which relate to the efficient use of resources based on optimization problems.

Last year, students Maxine Khumalo and Hazel Chieza benchmarked the Traveling Salesmen Problem (TSP) and the Quadratic Assignment Problem (QAP) on IBM Quantum devices, which they are now updating for a journal submission.

In support of its expanding research into the application of quantum computing, Wits is currently offering an honors-level module titled “Full Stack Quantum Computing” which will make use of the open source SDK, Qiskit, and the IBM Quantum Composer and Lab tools to give software engineering students a solid quantum foundation.

On South Africa’s coastline the University of KwaZulu-Natal, located in Durban has been dabbling in quantum machine learning as early as 2014 under the tutelage of Prof. Francesco Petruccione. 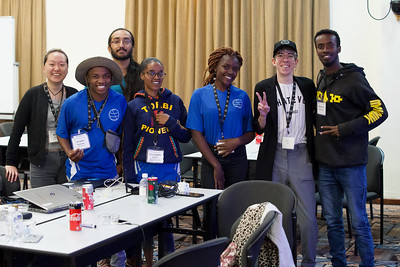 Qiskit Camps are an immersive experience that consists of training sessions, deep technical talks, and a hackathon alongside the Qiskit core development team. At Qiskit Camp 2019, attendees (pictured here) collaborated with quantum researchers and computer scientists to connect with the larger global quantum community.

David used IBM’s QPUs to perform a digital quantum simulation of convex mixing of quantum channels where he observed a transition between Markovian and non-Markovian dynamics of the resulting quantum channel. Following the surge of interest in applying QPUs for quantum kernel estimation, Shivani used IBM’s QPUs to estimate Gram’s matrix for few standard non-linearly separable datasets. Her studies demonstrated that one could use IBM devices for quantum kernel estimation tasks for QML.

One of Prof. Petruccione’s students, Amira Abbas, recently joined IBM’s quantum team in Johannesburg. Abbas is the first author of two submitted papers on quantum machine learning including a paper on quantum neural networks. Her colleague Waheeda Saib also has a paper submitted on the effect of noise on evaluating which ansatz circuit gives more accurate results in practice.

The IBM South African quantum team expects to submit a joint paper with Wits to a top peer-review journal in the coming weeks on the application of quantum computing to the study of the cosmic microwave background, important work related to the Square Kilometer Array. The team is also busy putting together an IBM Quantum Challenge for African developers later in 2021.

COVID-19 HPC Consortium one year on: Getting ready for the next crisis