“I relish pushing myself” chuckles Dr. Heike Riel, IBM Fellow — who has just been named a Fellow of the prestigious American Physical Society (APS). “No matter if it’s math, handball, playing the accordion, or breaking new ground in quantum computing — I enjoy giving my best at everything I do. And if it works it’s even more fun.” 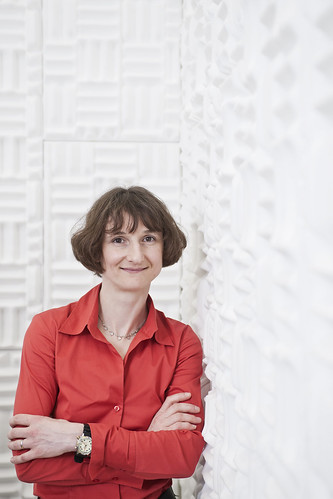 Dr. Heike Riel, an IBM Fellow and head of Science and Technology and IBM Research Europe Quantum lead, has been named an APS Fellow.

With such a zest for life, it’s no wonder Riel, who is head of Science and Technology and IBM Research Europe & Africa Quantum lead, is a highly decorated physicist with over 60 patents and many technological achievements. Among them is building the world’s largest full color display in 2003, which uses organic light-emitting diodes (OLEDs). At that time, the 20-inch screen she developed was brighter and more energy efficient than any other screen on the market. It paved the way for today’s vivid-color, affordable, flat-panel televisions, computer monitors, mobile phone and digital camera displays.

“We had one year to scale organic LEDs to make a 20-inch display in three different colors with pixel sizes of 100 micrometer-by-300 micrometer. Back then, people didn’t believe it could be done,” Riel says, “but that didn’t stop us.”

Several years later, Riel continues to break new ground. And her recent appointment as an APS Fellow attests her leadership in science and technology. While many distinguished physicists are part of the APS, only a handful are elected to the fellowship — and even fewer still are female. So when Riel learned last fall that she had been selected, she was deeply touched. “It’s truly an honor and I am humbled to have received this recognition from one of the most highly respected organizations for professionals in physics,” she says. “I am very grateful for my colleagues as well as the teams and institutions that have supported me along the way.”

Riel received the APS fellowship thanks to her technical accomplishments in materials and device research for nanoscale electronics, in the fields of semiconducting nanowires and organic light-emitting devices for display application. Perhaps the secret to her success is the kick she gets out of turning basic science into technical solutions and actual applications. The OLED research conducted in the beginning of her career started as basic research with foundational experiments and ended up being developed into a display technology that is now ubiquitous. For Riel, seeing research go well beyond a scientific publication is what makes her work exciting and rewarding.

Collaborations that take scientific ideas to uncharted territory also matter, she says. In 2003, when Riel won the MIT 35 under 35 Award, she met a professor of the Max Planck Institute, based in Halle, Germany who told her about their materials research in nanowires. The IBM research team at the time had the skills and infrastructure to make devices — but not the nanowire materials. She realized this was a unique opportunity, and formed a collaboration that gave IBM’s research on semiconducting nanowires a huge kickstart.

Thirteen years later – after a tremendous amount of research and development efforts – semiconducting silicon nanosheets, an improved version of nanowires, are on the roadmap for the 3-nanometer technologynode. Today, big companies like Samsung are teaming up with IBM Research to develop them. “It’s super exciting when you think about it — seeing the trajectory of research evolving into an actual product,” she says.

While a physicist today, originally Riel’s passion was mathematics. As a young girl, she dreamt of following in her father’s footsteps and becoming an engineer. Her interest in physics grew over the years as she realized that she loved working with her mind and hands — so much so that before getting into physics, Riel was studying to become a furniture designer and almost took a different career path.

But at some point, she started to understand that physics allowed her to unite the two things she’s most passionate about: math and the ability to create and build something tangible with her hands. But that doesn’t mean she has given up designing and building furniture completely. It is now a hobby her and her husband share in their leisure time. “I really enjoy working with wood because you can demonstrate your skills and you build something lasting. It requires precision to cut straight lines and planarize and form pieces that fit well together,” she says. Riel still has an eye for noticing if furniture is well-made or not.

IBM Research has certainly been the perfect place for her to live out her passion of building things from scratch. It is also a place where she is constantly challenged to solve real world problems, which she finds inspiring and highly motivating. The bigger the challenge, the better, she says.

Today, at IBM Research Europe at the Zurich lab (home to four Nobel laureates), she researches technologies that could change our future — including quantum computing. Using the skills and materials from previous projects, her teams keep making new discoveries. For science buffs, IBM Research is where a quantum computer went online for the first time. Since then, IBM has reached many milestones, guided by a progressive roadmap to scale quantum technology.

If you ask Riel to give advice to younger generations looking to pursue a career in math or physics, she will tell you that these disciplines are a foundation for various other subjects. She’ll tell you that they are great training to build up your logical thinking skill and analytical capabilities. With such a foundation, the world is at your feet.

Join her for a behind-the-scenes discussion hosted by IBM Research Editorial Lead Katia Moskvitch on 4 February, 2021 at 7:00 PM CET / 1:00 PM US Eastern on YouTube Live. Don’t miss your chance to ask her questions through the livestream comments!