IBM Project Debater Demonstrates the Future of Democracy in Switzerland

Can Artificial Intelligence (AI) capture the narrative of a community on a controversial topic to provide an unbiased outcome? Recently, the citizens of Lugano, a city of more than 60,000 citizens on the Swiss-Italian border, provided the answer. 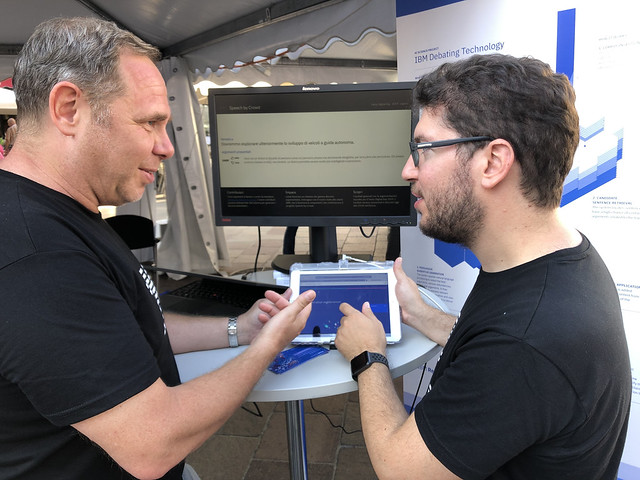 In this photo, Paolo Scotton (left) and Michele Dolfi, from IBM Research, collect arguments from citizens of Lugano and enter them into IBM Project Debater – Speech by Crowd.

What is Project Debater?

In February 2019, IBM unveiled Project Debater to the world. It’s the first ever AI technology to meaningfully engage in a live debate with a human. Take a step back and think about that for a minute.

Without being connected to the Internet, Project Debater took on the 2016 World Debating Championships Grand Finalist and 2012 European Debate Champion Harish Natarajan.  For the debate, each side had only 15 minutes to prepare. Once the debate started, each side presented a four-minute opening statement, a four-minute rebuttal, and a two-minute summary.  The audience was polled before and after and the stance change would determine the outcome.

The spectacle was the culmination of several years of research and a milestone in a computer’s ability to master human language. If you missed it, a replay of the full debate is available to watch.

The project, which started back in 2011 shortly after the historic match of Watson on Jeopardy!, reflects the mission of IBM Research, which is to develop broad AI that learns across different disciplines to augment human intelligence.

This is different when compared to today’s AI assistants which have become highly useful to us through their ability to conduct sophisticated keyword searches and respond to simple questions or requests (such as “how many ounces in a liter?” or “call Mom”). But Project Debater explores new territory: it absorbs massive and diverse sets of information and perspectives to help people build persuasive arguments and make well-informed decisions.

The research team also looked at how to extend the core AI in Project Debater beyond a debate format only and the idea for Project Debater-Speech by Crowd was born.

As it sounds, Speech by Crowd supports the collection of free-text arguments from large audiences on debatable topics to generate meaningful narratives out of numerous independent contributions.

This past summer, IBM researchers experimented with Speech by Crowd at the IBM THINK conference in Tel Aviv where they collected arguments from more than 1,000 attendees in the audience on the legalization of marijuana. The audience was asked their opinion about the topic before the arguments were heard and then again after Speech by Crowd shared its narrative and in the end the audience was overwhelmingly for legalization at 76 percent.

From these very disparate submissions, Speech by Crowd extracted key themes, summarized them concisely, and selected the highest quality arguments to support each theme. This resulted in compelling narratives, representing both sides of the debate, including insights and thought-provoking points by many different individuals.

Speech by Crowd Comes to Switzerland

As part of the City of Lugano’s Living Lab Project, IBM brought Speech by Crowd to the city to help understand where citizens sit on the topic “We support the development of autonomous vehicles.”

Starting in mid-August, IBM and the City of Lugano started collecting arguments and, after 15 days, more than 2,400 arguments were contributed. In the end, 68 percent of the citizens voted for the further exploration of developing autonomous vehicles, with 32 percent against.

The final narratives were presented on 3 September on Swiss Digital Day in Lugano.

The naysayers cited that the technology is immature, that it will lead to regression of the human condition, and expressed that funding for autonomous vehicles should instead be used to improve public transport and job losses.

In the end, of course, it’s up to a human to make the final decision, but at least now the voice of the citizens can be factored into that choice.