Modern digital computers have changed our lives in a variety of ways, but the technology on which they are built has still some room for improvement. As computational workloads continue to grow due to massive amounts of data and techniques like artificial intelligence, more powerful computing technologies become of paramount importance.

Two of the main pillars of our modern digital computers are the electronic transistor and the von-Neumann computer architecture. While the von-Neumann architecture established the physical separation of computing tasks like storage and processing, transistors are the fundamental building blocks in our digital computers. By cramming ever more transistors on ever smaller chips we have come to build devices like our smartphones with orders of magnitude more computing power than the large computers used by NASA to land the first men on the moon.

But none of these inventions are guaranteed to stay with us forever. In fact, in recent years we have witnessed a renaissance of interest in radically different components and architectures. The future of computing may comprise AI-tailored hardware, in-memory, analogue and quantum computing. At IBM, researchers have been exploring that kind of novel technologies for many years and are broadly investigating what physical concepts could be harnessed to power our future information processing infrastructure. 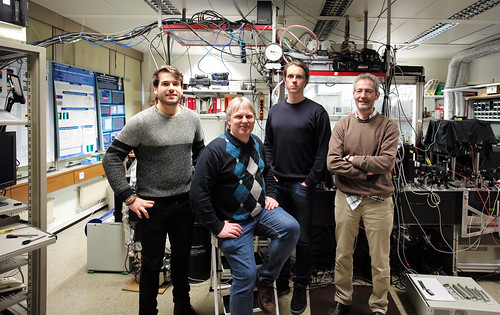 Now, our team at the IBM Research Lab in Zurich together with our partners from the research lab of Prof. Pavlos Lagoudakis at Skolkovo Institute of Science and Technology and Southampton (a collaboration established within the framework of the European Horizon-2020 training network SYNCHRONICS), has succeeded in building the first ever cascadable, all-optical transistor capable of operating at room temperature. The team achieved this by exploiting the material properties of an organic semiconducting polymer. Based on this material, a microcavity was engineered in which an incoming optical signal (a laser beam) can be switched on and off or amplified by another laser beam.

The work is featured on the cover of the latest edition of the peer-reviewed journal Nature Photonics.

All-optical components that manipulate information with light alone could enable much faster switching and logical operations as well as provide building blocks for new applications like routing “flying qubits” from quantum microwave optical transduction or blind quantum computing. But such all-optical components are very difficult to build. And in fact, efforts to make all-optical computers have been around for about 50 years.

In order to switch or amplify an optical signal with another optical signal, a material that mediates the interaction is needed. It’s just in the quantum nature of light beams that they don’t interact with each other in vacuum. In our transistor, the mediating part is done by quasi-particles known as exciton-polaritons. They arise in an organic semiconductor (methyl-substituted ladder-type poly- [paraphenylene] or MeLPPP) provided by our long-time partner Prof. Ullrich Scherf from the Wuppertal University. We placed a 35 nanometer-thin layer of MeLPPP between two highly reflective mirrors to form an optical cavity in which exciton-polaritons were produced using a laser. An exciton-polariton consists in the superposition of an exciton (an electron-hole pair) and a photon. That’s why our device falls in the category of organic polariton transistors. 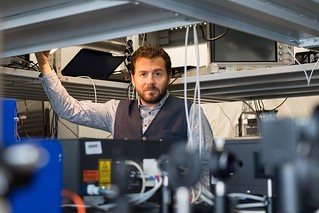 Our transistor not only is the first of its kind to work at ambient conditions, it also provides an unprecedented 6500-fold optical signal amplification with a device length of just a few micrometers. That is 330 times higher than the amplification attained by its inorganic counterpart and allows for cascadability, which is a necessary condition to use the transistor for logic gates. In experiments, our device also exhibited the highest net optical gain ever observed for an optical transistor (~10 dB/micrometer).

Furthermore, our transistor features ultrafast switching in the sub-picosecond range, which makes it comparable in terms of multi-terahertz switching speed to some previous all-optical devices with the added advantage that our device doesn’t require cryogenic cooling to operate.

Importantly, our organic polariton transistor gets rid of another limitation present in its inorganic counterparts that is relevant for practical purposes. In inorganic polariton microcavities, the pump laser used to trigger the transistor response must be directed at the device under certain angles only. In our organic device, there’s no specific requirement on the angle of the pump laser which gives much greater flexibility in the geometry of the setting and allows for fiber pig-tailing of the optical device or creating integrated planar circuits with it. Read on to learn how we achieved this.

For the experts: How we did it

In our material, the energy states of exciton-polaritons are given by several so-called polariton branches, which arise from strong light-matter interaction of the cavity photons with the excitons. Our strategy consisted in using the bosonic nature of exciton-polaritons and the occurrence of strong vibrational excitations in our organic semiconductor to trigger an avalanche-like relaxation of the excitons to the lowest polariton branch (ground state). We anticipated this vibron-mediated relaxation channel to be strong enough to outcompete the multiple internal conversion channels in our material. And our expectations were thoroughly confirmed by the experiments.

In a first step, we used a pump laser to produce a large population of hot excitons. We tuned the wavelength of this laser to produce excitons with an energy exactly one vibronic energy quantum above the lower polariton branch in our microcavity. The vibronic mode we exploited here corresponds to a “breathing mode” in which ring-shaped aromatic units within the polymer shrink and expand in a way that resembles a breathing lung. As stated above, we only had to care about the energy of the pump laser photons, but not their in-plane momentum component. This is possible because of the wide spread in the momentum distribution of the strongly localized excitons in our material. That means that the stringent phase-matching requirement typical of inorganic microcavities is irrelevant in our system, and it can be pumped at almost any angle. 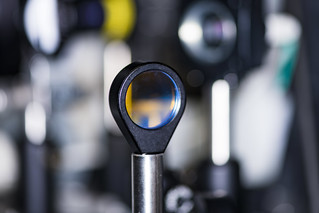 With increasing pump excitation density, we observed a transition from the linear to the non-linear regime, with the threshold density lying at roughly 82 μJ cm−2. To lower the threshold and further accelerate the relaxation of excitons to the polariton ground state we seeded this ground state with a control beam. This seeding proved very effective in speeding up the relaxation process, in spite of the fact that the excitation density of the control beam was kept constant at about 20 nJ cm−2, more than three orders of magnitude weaker than the non-resonant pump. By seeding the ground polariton state, we observed nearly twice lower threshold for polariton condensation, while the exciton to polariton relaxation rate was increased by a factor of 50 under the same non-resonant optical excitation density.

Sub-picosecond switching times were achieved thanks to the combination of ultrafast exciton relaxation dynamics, inherent to organic semiconductors, and the sub-picosecond cavity lifetime of our device. In our setup, the pump beam formed the address state that was gated by the control beam. Keeping the switching energy of the control beam at 1 pJ, we attained a maximum extinction ratio (determined as the intensity ratio between the ‘1’ and the ‘0’ state) of 17 dB. The response time for switching between the two logical states was roughly 500 femtoseconds.

Finally, we demonstrated the potential of organic polariton transistors for cascadability by implementing two-stage cascaded amplification. In our scheme, the condensate emission (Address 1) of the first stage is redirected onto the “chip” and amplified further by a second pump. Furthermore, we employed the concept of cascaded amplification to demonstrate OR and AND logic gate operation by coupling three polariton transistors on the same “chip” utilizing a single pump-double probe optical setup. 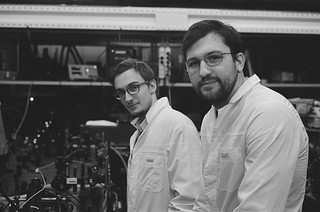 Our experiments demonstrate vibron-mediated, dynamic polariton condensation in an organic microcavity at ambient conditions, enabling all-optical polariton amplification, switching at sub-picosecond time scales as well as cascadability and OR and AND logic gate operation. Efficient control over the address state permits reliable switching between ‘low’ and ‘high’ logic levels with ultrafast transient response, while the giant net gain of the structure gives rise to record optical amplification at the micrometer scale.

The developed principles of dynamic polariton condensation in combination with the recently observed frictionless polariton flow in organic microcavities [Lerario et al., Nat. Phys. 2017], pave the way for on-chip circuitry with ultrafast, all-optical, logic operability. If one could furthermore exploit strong polariton-polariton interactions, where important progress has just been shown earlier this year with inorganic microcavities [Delteil et al., Nat. Mat. 2019 and Munoz-Matutano et al., Nat. Mat. 2019], such transistors would be able to operate with only a few photons, and thereby drastically lowering the required switching energy to the attojoule regime.

Work by our group at IBM Research Europe in Zurich has led to a new method for the rapid implementation of microfluidic operations. By tailoring the potential landscape inside a flow cell, we form so-called “virtual channels” on demand to perform high-precision guiding and transport, splitting, merging and mixing of microfluidic flows. This allows to […] It is well known that the human body is mostly composed of water: The brain, for example, is 75 percent water and even bones are not “dry” – containing as much as one third water. All of this water maintains the shape and structure of biological cells and is involved in numerous biochemical processes. It […]

A new study in JAMA Network Open highlights how AI can improve the accuracy of breast cancer screenings in combination with assessments from radiologists.