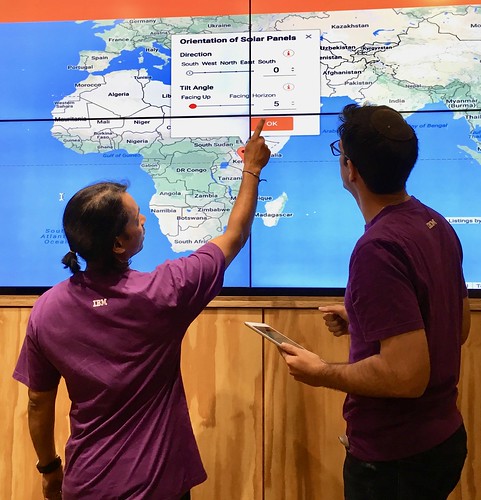 Two of the IBM researchers who developed the app, Toby Kurien (left) and Ashley Gritzman.

More than 600 million people in sub-Saharan Africa live off the energy grid and 80 percent of Africa is un-electrified, according to the South African National Energy Development Institute (SANEDI).

Similar to how Africa has leapt over telephone lines directly to mobile phones and are jumping over physical money to digital, the continent also has the potential to avoid building more costly energy grids and pivoting instead to clean, green solar energy.

“Grid instability and rolling blackouts have increased the popularity of battery-based solar systems in African cities. However, homeowners embarking on this journey have quickly discovered that they are ill equipped to navigate the many options presented by solar suppliers,” said Dr. Gritzman. “With our app, we eliminate these barriers to entry by enabling users to design a system for themselves.” The easy-to-use app designs a solar photovoltaic (PV) system for homes or businesses based on the sunlight at the location, the direction of the roof, and a list of electrical appliances that need to be powered.  The design includes specification of the solar panels, storage batteries, controller, inverter, and the estimated cost, currently in South African Rands.

He adds, “Under the covers of the app is a sophisticated algorithm we developed, which takes the solar radiation data for locations to recommend the type of solar system needed based on the average needs over the year.”

The app runs within the browser of any PC or smartphone and is hosted in the IBM Cloud. After simply choosing their installation location on a map, users can choose from a list of common appliances, such as a TV, LED lights or a laptop. Then they choose how many of the appliances they own and the frequency of use.

For the launch, the app is targeted at users in South Africa, but the team expects to add more countries in the near future.

“The app can be used by anyone in Africa, we just need to find more suppliers outside of South Africa who are interested in sharing their product and services pricing data so we can calculate the estimates,” said Gritzman.

Try it today on the IBM Cloud.