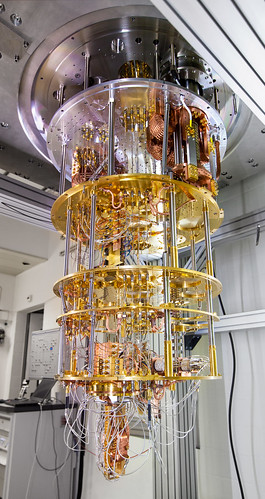 Submissions for the IBM Q Prizes opens in January 2018.

Whether its PCs, smartphones or quantum computers, one fact remains consistent: the recipe for success relies heavily on building an engaged and thriving ecosystem.

For example, on 12 August 1981 when IBM introduced the IBM 5150 (eventually called the IBM PC) at a press conference in New York City it came prepackaged with third party technology including VisiCalc, a spreadsheet; EasyWriter, a word processor and a dot-matrix printer.

This was only possible because IBM opted to make the 5150 an “open architecture” product, meaning it had published a technical reference of the system’s circuit design and software source codes, so other companies, like VisiCorp, Information Unlimited Software and Epson, could develop software and build peripheral components. Making the PC open worked and by January 1983, IBM PCs were sold around the world — at its peak, an IBM PC sold at a rate of one every minute of every business day.

Here we are more than 30 years later and another technological revolution is underway — quantum computing. Quantum computing follows the “spooky” world of quantum mechanics, making it a completely new field for developers to write software for, while also presenting a new way to code.

To remove some of the hurdles of entering this new world, in 2016 IBM launched the IBM Q Experience, a cloud-based quantum computer available for free to anyone with a web browser and an internet connection. More than a year later a thriving community of nearly 60,000 users with 1.7 million quantum experiments and more than 35 third-party research publications has made the Q experience a great platform for education and research. Professors are even using it as a teaching tool in their classrooms, including Dr. Clément Javerzac-Galy, a doctoral assistant at one of top technical universities, the École polytechnique fédérale de Lausanne (EPFL) in Switzerland.

Javerzac-Galy said, “We are using the IBM Q Experience in the framework of our quantum information class. It’s fascinating for the students to be the first generation to use a quantum machine and it’s a tremendous tool to speed up the learning curve in quantum information. Things you would previously do in the past with a paper and pencil you can now do on a real machine.”

To encourage more teachers and students to take advantage of the IBM Q Experience and the IBM QISKit development platform, IBM Research is announcing today a number of prizes to encourage more of them to take the quantum leap. The prizes include:

In addition, a quantum computer is only as useful as the software which can take advantage of it. A fourth prize is therefore being launched for software developers. Modern AI systems have reached human-level abilities on tasks spanning object recognition in photos, video annotations, speech-to-text conversion and language translation. Many of these breakthrough achievements are based on a technology called Deep Neural Networks (DNNs). DNNs are complex machine learning models with an uncanny similarity to the interconnected neurons in the human brain, giving […]