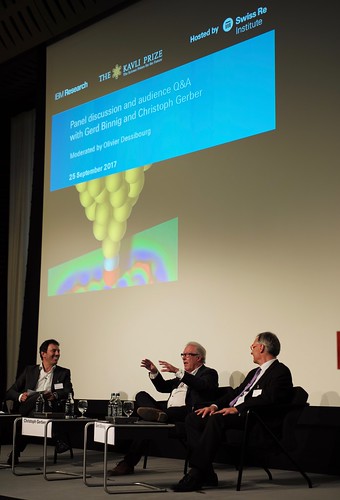 Gerber and Binnig reflect on the invention of the AFM.

As a follow up to the formal events surrounding the Kavli Prize, the Kavli Foundation and the Norwegian Academy of Science and Letters have started a series of symposia featuring their Laureates to not only recognize their accomplishments in a more public setting, but to also motivate young people and students into a scientific career.

Last week, Kavli and the Norwegian Academy, in collaboration with IBM’s Zurich Research Lab organised such a symposium with two of the three 2016 Kavli Laureates for Nanoscience: Gerd Binnig and Christoph Gerber. The two retired IBM scientists, along with Calvin Quate were recognized last year  “for the invention and realization of atomic force microscopy (AFM), a breakthrough in measurement technology and nanosculpting that continues to have a transformative impact on nanoscience and technology.”

After months of planing, the public event took place at the prestigious SwissRe Center for Global Dialogue in Rueschlikon, Switzerland, a few hundred meters from the IBM lab where the two scientists spent a large portion of their careers.

Perhaps the highlight of the agenda was a panel discussion with the Laureates. After several questions on stage, the following question from a member of the audience was posed to them, “How do you knowing when you are on the right path to a eureka moment?”

Binnig, who is a prolific inventor, beyond his Nobel Prize invention known as the scanning tunnelling microscope and the AFM, answered the question almost poetically saying, “My strategy is, I prove to myself that this is the wrong path, and if I can’t prove this is the wrong path, I continue.” (Watch a replay of the entire event: Video 1, Video 2)

Just as the celebration of the Kavli symposium was ending, the IBM Zurich Lab was honoured again by the European Physical Society (EPS) as a Historic Site, joining other renown scientific locations including Einstein House Bern and the CERN Synchrocyclotron.

The news was unveiled in a ceremony at the IBM lab with employees and guests including the Mayor of Rueschlikon and Nobel Laureate K. Alex Müller.

Dr. Rüdiger Voss, EPS President, made the official announcement stating, “This IBM location has achieved many firsts, including the first industrial lab on the EPS Historic Sites List. This will hopefully add some encouragement to industry to keep up their investments in basic research as the ultimate foundation for the progress of science and technology.”

?Proud day for us in Zurich – the IBM lab was just named a historic site by the @EuroPhysSoc joining @CERN and Einstein House Bern pic.twitter.com/NEbHKyjB7q