Imagine covering the globe with a sheet of artificial, internet-enabled neurons. And these Internet of Things (IoT) neurons could send their local information to other neurons just like the synapses in our brains. For example, a ground temperature neuron at one location gets collected and shared with air quality neurons, and vice versa. This spatio-temporal data could allow us to make constant, finer resolution forecasts, leading us to come up with a better action plan to deal with everything from storms to droughts – and maybe find out what happens to the weather in New York, when a butterfly in Tokyo flaps her wings.

To take this idea from the neurons of my mind, to the IoT neurons of reality, I am applying the Dynamic Boltzmann Machine (DyBM) model, a bio-inspired machine learning technology that understands the spatial relevance and time-evolving nature of spatio-temporal data – all at the same time.

I used to study machine learning with “microscopic” eyes – trying to understand what happens between neurons. In fact, most of the current neural network models are founded on a microscopic approach that models the dynamics of a finite number of neurons for time-series predictions. In this approach, a network of neurons is connected one-by-one. Information does not cascade across the network, like a neurotransmitter might in the brain.

“Is it possible to build a neural network model in a ‘macroscopic’ way? Could data propagate over a network of neurons, instead of from one neuron to another?”

A macroscopic network of neuromorphic sensors could represent a number of neural connections in a much more compact way than the existing microscopic networks, which is essential to our “sheet of neurons” idea of an infinite number of neural connections. Taking the weather example again, this macroscopic model would deliver fine-grid forecasts from any location, to any location, compared to existing models that only deliver forecasts at finite locations.

Here’s where DyBM’s machine learning comes into the equation: It allows us to forecast the future, considering all the past data, using an efficient online algorithm. This capability, alongside the incredibly specific data, increases the accuracy of forecasts.

Rolling out a sheet of neurons

The “sheet” idea is not just a metaphor of how these IoT neurons could blanket the world. In truth, they already do, as any type of sensored device could contribute as a data source. It’s just a matter of connecting to the [DyBM] neuromorphic, macroscopic model. Each device would contribute to greater forecasting accuracy.

I believe this new technique opens up a research direction toward a macroscopic view of neural networks. To increase its capability, we must draw ideas from the deep learning community as well as the computational neuroscience community. Such interdisciplinary activities will bring benefit and expand application possibilities to help solve real world problems – like hyperlocal weather forecasting. 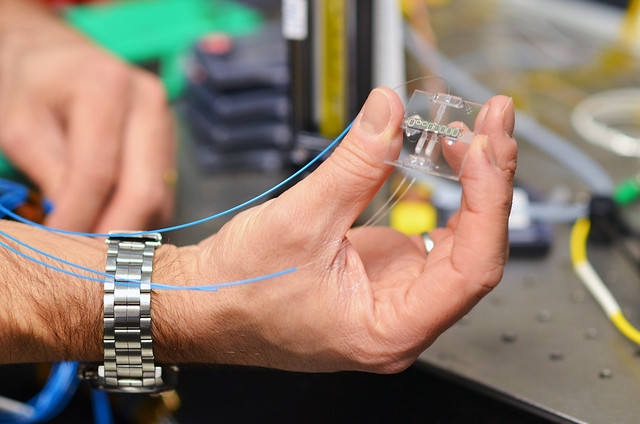 As part of IBM’s 2017 5 in 5: Five Innovations That Will Help Change Our Lives Within Five Years, IBM Research predicts that Macroscopes will help us understand Earth’s complexity in infinite detail. In five years, we will use machine-learning algorithms and software to help us organize the information about the physical world to help bring the vast and complex data gathered by billions of devices within the range of our vision and understanding.