In January 2017, Ton was appointed honorary professor of Data Science Engineering in the Institute of Artificial Intelligence & Cognitive Engineering (ALICE) of the Mathematics and Nature Science department at the University of Groningen, where today he will give his inaugural lecture titled “The Future of IT – You ain’t seen nothing yet…”

Before officially handing in his IBM badge we took the opportunity for a one-on-one talk with him to learn more about his illustrious career and his plans for the future.

You joined IBM Research – Zurich in 1980. What made you come to Switzerland and apply at IBM Research?

Ton Engbersen (TE): When I was at school, maybe around my 13th birthday, I received a little booklet about IBM Research and  I read about the lab in Switzerland for the first time.

Years later I did my studies, finished my Master diploma and was 22. I did military service for two years till I was 24 and I looked at myself and thought about working for a company in the Netherlands for 40 years – in those times one usually stayed with one firm – and then retire. But then thought, well, that sounds incredibly boring. So, I applied for a scholarship in Switzerland at ETH Zurich and was accepted. In 1979, I moved to Zurich to become a Bundesstipendiat at the ETH.  Then fate stepped in.

In February 1980, during a break between two lectures at the ETH, there was a foil on the over-head projector mentioning that IBM’s Zurich Lab is looking for students for programming work. There was also a phone number. I called and got Dr. Stucki on the phone and he invited me to the lab. And long and behold, in May 1980, I started at the lab as a student for three months. And I loved it.

And then you stayed on …

TE: At the end of these three months, I asked if I could stay here and they told me that they only hire people with a PhD. But as luck would have it, the lab just started a Pre-Doc program where students could work at IBM while going to school. I was the third to participate.

I finished my PhD in April 1983 and became an IBM Research Staff Member in the Image Processing group. Because I’m a hardware guy, I started to put hardware in and subsequently moved on to using computers to design hardware systems. Together with Ronald Luijten and a colleague from Austin we starting designing a support chip for signal processing in the group of IBM Fellow Gottfried Ungerboeck. The chip worked, so we build a card. There was a development here starting the next generation Token Ring which the lab was famous for in the mid ‘80s and we built the first switching chip around ’88. 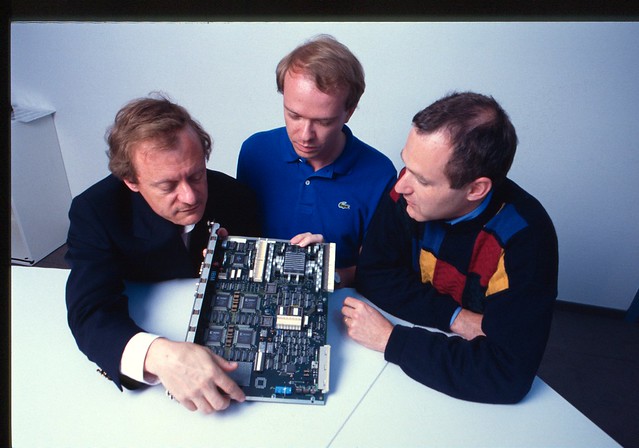 One of Engbersen’s hardware designs in the 1990s.

We already had some thoughts about the second switch, which was 30X faster. Everybody was confused about why we wanted to build one that was faster and it was unnecessary – this was pre-Big Data. But nevertheless, we build it in three years and eventually it became part of two IBM products.

Most recently, in 2012, I led the signing of an exciting project called DOME with ASTRON in the Netherlands to built a hardware roadmap for the Square Kilometer Array. It will wrap up later this year and the progress we have made is nothing short of remarkable.

You never concentrated on one topic, is that part of what kept you at IBM?

TE: Absolutely. Change is always an opportunity. Sure, it’s always sad to leave something behind, but don’t ponder to much about it. Changing focus once in a while is much less dangerous than sticking with something for too long.

In 2006/2007 all projects were going so well, that I felt bored. Back then, IBM was all about IT and business process outsourcing so I thought why not go for one or two years into selling innovation in outsourcing. During this time, I learned an awful lot about IT beyond the knowledge I gathered here at the lab. And every time you do something different, you change. There was no masterplan I followed because I never bothered much about thinking about my career. If your work is interesting and you are happy, you shouldn’t plan so much, because when you do you will miss the opportunities that come along.

What does it mean for you to be a successful researcher? And do you think this changed over the last 20-30 years? Does one need more skills today than in the past?

TE: Today you really need to understand the business implications of what you are trying to achieve. That was less the case 20 years ago. I think what happened over the years is that IT-focus moved away from something I’d call “enterprise-IT” to “consumer-IT”. Now the consumer is driving what is happening in IT. Now we have to think over how we position what we do. But is that a major change? I don’t think so. I think innovative and good work is still highly valuable and pairing that with a decent insight for what is good for the business is probably an easy recipe for success.

What piece of advice would you give a young post-grad entering the company?

TE: Don’t make decisions only based on calculations, but also on what you feel. I can’t say why, but over all of the years working here, I realized that you can not predict everything. Your intuition is often a very good guide. Planning five steps ahead doesn’t work in reality where you constantly have to adapt, decide, and then execute — being agile is critical.

You will stay on after your retirement as a technical adviser and you hold a professorship at the University of Groningen. What would you like to achieve looking ahead?

TE: That’s very simple. I believe that cognitive computing is the next big frontier in IT.

I’m currently planning a project with the University of Groningen in which we explore cognitive technologies to improve and accelerate material sciences and discovery. I spoke two weeks ago with the materials research group in Groningen which is among the best in the world and I asked them:

“What if you have a very good idea, but instead of going to the lab and to try and make it work you talk to your computer about it?  Then 15 minutes later it answers you by giving you five different papers that come somewhat close to your idea and help you refine it. Instead of going to the lab and test something a hundred times, it may just take two times to make a really valuable discovery.”

You don’t have to be scientist to understand the value of this idea. And they started thinking about it and quickly agreed with me. So, that’s what I want to do next.

IBM at SPIE: Seven Advancements for Beyond 7nm Chips