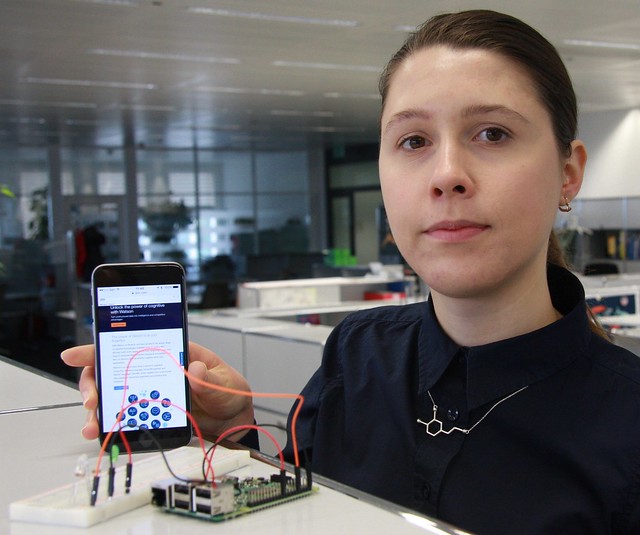 Anca-Nicoleta Ciubotaru, an intern at IBM Research placed 3rd in a recent hackathon using IBM Bluemix. For motivation she often wears a neckless with the chemical symbol for dopamine.

It could be if IBM Research intern Anca-Nicoleta Ciubotaru has her way. She recently took 3rd place in a hackathon using IBM Bluemix and IBM Watson services for a unique project which uses human stimuli to adjust the lighting in a room.

Can you introduce yourself?

Anca-Nicoleta Ciubotaru (ANC): I was born in Pascani, a city in the northeast of Romania. My mother is a math professor and she encouraged my interest in the sciences since I was a child.

I’ve always been curious and never afraid of learning new things which may have a difficult barrier of entry. I’ve always been good with numbers, finishing first in class, so it was a natural career path to study computer science.

I joined IBM Research – Zurich after applying for the  IBM Great Minds internship program last winter. After several interviews I was accepted and I am now working in the Cognitive Computing department.

Can you tell me about your hackathon project?

ANC: The idea came to us rather spontaneously during the preliminary hackathon workshops.

The interest in artificial intelligence (AI), embedded systems and cloud computing combined with information about the IBM Bluemix services helped me and my colleague Marcel Német, a former IBM Research intern, to create the “Sentiment of Things” project for the hackathon, which uses sensors, the cloud and AI to understand and react to different human stimuli.

For example, our prototype could adjust the lighting in a room based on the sentiments extracted from people’s conversations. The conversational speech is captured and transformed into text using the IBM Bluemix Speech to Text API. Then sentiment keywords are extracted from the text in a subsequent step by using the IBM AlchemyAPI and then it’s sent to an embedded system built with a Raspberry Pi which can control several LEDs. For instance, a happy mood would turn on a green LED, sad mood, a red one.

It’s true that this is just a simple prototype and, at the moment, doesn’t have advanced features, but I’m sure it can be improved. I was so surprised that we won the 3rd place. The idea was to make the room react with people’s feelings.

What are some of the practical applications you envision?

ANC: One use case could be for an intelligent house — creating an environment which knows how I am feeling. If I am stressed for example, the lighting could adjust to be more calming. I could imagine this being useful also during a negotiation in a business or political setting.

How long did the development take?

ANC:  Marcel asked me to join his team the day before the hackathon, so there wasn’t much time to prepare in advance. Once we started we had a working prototype in 12 hours. We even had time to take a nap. It’s a real testament to the ease of use of the Bluemix platform that we could be up and running so quickly.

Will you continue to work on the project?

ANC: Well my lab work is currently focused on using machine learning to find patterns in large data sets, but  I will try and continue in my spare time. Ideally, I would welcome the chance to implement my idea in real projects that my colleagues are developing with clients.

How to find your grandmother in a wedding video

Confidentiality and Governance of Cloud Services

Your team has spent months developing, tuning and perfecting a complex deep neural network to classify important financial, medical or government data. The application has been containerized, packaged, and is finally ready to deploy as a public service on the cloud, but one thing stands in the way. How do you get assurance that your […]