Several weeks ago IBM officially switched on the “open for business” sign at its research lab in Johannesburg, South Africa with a grand opening event.

More than 150 guests were treated to a tour of the lab which included demos showing how IBM scientists are using cognitive computing, the Internet of Things and Big Data to support South Africa’s national priorities, drive skills development and foster innovation-based economic growth.

“I think IBM and Wits have not just broken the mold, but recast a completely new one for public-private partnerships in Africa and we want in” – Dr. Saloojee

Following in the footsteps of its other Research labs, IBM has partnered with a local university to fast track access to world-class talent — the University of the Witwatersrand (Wits).

Wits and the Joburg Centre for Software Engineering (JCSE) are building up an ambitious information communications technology (ICT) cluster development program in the so-called Tshimologong Precinct of the city and are actively recruiting additional partners to join the effort. IBM Research was the first partner to join.

Another interested partner is Canada’s Ryerson University, which in addition to its academic acumen is also known for annually breaking Guinness World’s Records, like “the most people simultaneously blowing bubbles from chewing gum.”

Dr. Anver Saloojee, who is a professor at Ryerson, attended the IBM lab opening on behalf of the university’s President and before making the long flight home I asked him a few questions.

What are Ryerson’s interests in South Africa? 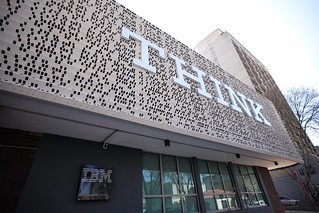 Anger Saloojee (AS): Actually, it’s not just our interests, but the entire country of Canada. In 2015 the Canadian government identified India and South Africa as important countries to develop and magnify trade and business opportunities. This led us to reach out to Wits and the Bombay Stock Exchange, and the result was a trilateral partnership to accelerate startup incubation and growth opportunities for entrepreneurs in each of our respective countries.

For Canadian start-ups this partnership will also give them access to these markets, which combined equals 1.3 billion people. But this is only the first phase of any exciting journey.

What are the next phases?

AS: Glad you asked. This is why I am down in South Africa this week. We are partnering with Wits to build a South African University hub. 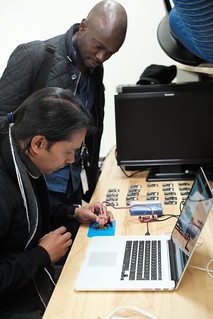 IBM scientists are tracking TB using the Internet of Things.

As for phase three: We want to expand our collaboration network in South Africa to the private sector. Therefore, the timing of IBM’s new lab couldn’t be better. I think IBM and Wits have not just broken the mold, but recast a completely new one for public private partnerships in Africa and we want in.

Based on my conversation with Solomon Assefa (the director of IBM Research – Africa), we have many synergies, particularly since we already have a strong collaboration with IBM in Canada, particularly with the IBM Bluemix Garage.

You attended the lab opening yesterday and met with our scientists during the demo tour. What’s your impression?

AS: For starters the experience has contributed to something which I have believed for a long time, that if you give talented, young people an opportunity and you don’t confine them, they will unleash their forces in phenomenal ways.

Yesterday I heard from your teams in the maker space, where they are tracking tuberculosis with IoT sensor tags created by a start-up and I thought, of course! Why use manual paper surveys, which are unreliable when you can track the source?

I was also impressed with the work of the teams focused on traffic management using social media and using weather data to anticipate wild fires. Simply brilliant.