Earlier this year, scientists at ETH Zurich and IBM Research – Zurich published a new method in Science Advances to fabricate artificial molecules out of different types of microspheres, small round particles with a diameter of 1 micrometer – roughly the size of bacteria. While tiny, the scientists believe that one day these microscopic objects could be used in micro-robots, photonics, and basic biochemical research.

One of the scientist focused on this research is Songbo Ni, a pre-doc at IBM’s lab in Zurich, studying at ETH Zurich. Today, he was awarded the best poster prize for “Programmable Assembly of Colloidal Molecules” at the Royal Chemistry Society’s Faraday Discussions conference.

I sat down with Songbo to discuss his research.

Please describe your research. What is its significance?

Songbo Ni: We invented a way to manufacture hybrid colloidal objects, which outperform the existing methods, such as physical vapor deposition, seeded polymerization, and others – which are typically limited to simple composition and geometry.

We found out that by understanding the geometry of the trapping site, we can place different particles in certain positions in the same site to create unique complex objects with the sequence we want to program.

How did you go about assembling the colloidal molecules?

SN: The technique has some things in common with the well-known coffee stain effect.

In a drop (of coffee) you have evaporation which is stronger on the edge, and less in the bulk. This leads to a flow of particles from the liquid inside to the edge and deposits tiny particles of coffee at the edge forming the typical dark ring.

We used a similar idea. We put a water droplet containing microspheres on a template with holes, and evaporated the droplet to bring the particles to the front. And then we moved the drop over the holes. The particles will be positioned in the holes we designed because of the surface tension of the water. 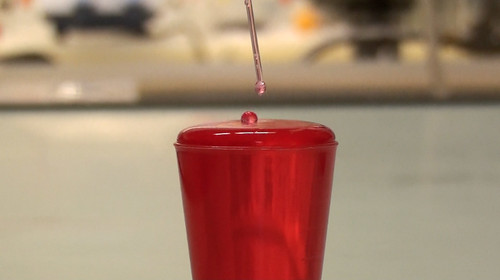 The phenomenon of the surface tension of water keeps the liquid from spilling over the sides of the cup.

What are the applications of what you found in your project?

SN: At this time the experiments are primarily related to fundamental research where people can use these colloidal clusters as models to understand many natural self-assembly processes. Our technique can be used with a variety of functional particles towards practical applications.

For instance, introducing magnetic particles can allow for external manipulation of the clusters. If we further combine drug-loaded particles, this could be used in drug delivery to release drugs in a specific place for personalized healthcare.

What are the next steps for you?

SN: We are still investigating these particles, demonstrating how we can combine different materials in various geometries to program a certain anisotropy, meaning directional dependence. Local anisotropy has been well known for being responsible for local motions in many micro-objects, such as Janus catalytic particles and bacterial flagella. We are exploring the ability to combine different properties in a single colloidal object and then make it act as a tiny robot with an external energy input.

The next results promise to be exciting. Hopefully, we’ll soon demonstrate how we can make these particles act as random swimmers, mixers and transporters, which can be highly useful in biophysical and biomedical research.