IBM Scientists Invent a Thermometer for the Nanoscale

The IBM lab responsible for inventing the scanning tunneling microscope and the atomic force microscope has invented another critical tool for helping us understand the nanoscale.

Accurately measuring the temperature of objects at the nanoscale has been challenging scientists for decades. Current techniques are not accurate and they typically generate artifacts, limiting their reliability.

Motivated by this challenge and their need to precisely characterize the temperature of new transistor designs to meet the demand of future cognitive computers, scientists in Switzerland from IBM and ETH Zurich have invented a breakthrough technique to measure the temperature of nano- and macro-sized objects. The patent-pending invention is being disclosed for the first time today in the peer-review journal Nature Communications, Temperature mapping of operating nanoscale devices by scanning probe thermometry (doi:10.1038/ncomms10874)

A History of Invention

In the 1980s, IBM scientists Gerd Binnig and the late Heinrich Rohrer wanted to directly explore a surface’s electronic structure and imperfections. The instrument they needed to take such measurements didn’t exist, yet. So they did what any good scientist would do: they invented one. It became known as the scanning tunneling microscope (STM), opening the door to nanotechnology. Just a few years later, the invention was recognized with the highest of honors, the Nobel Prize for Physics in 1986.

More than 30 years later IBM scientists continue to follow in the footsteps of Binnig and Rohrer and with their latest invention.

Dr. Fabian Menges, an IBM post-doc and co-inventor of the technique said, “We started back in 2010 and simply never gave up. Previous research was focused on a nanoscale thermometer, but we should have been inventing a thermometer for the nanoscale — an important distinction. This adjustment led us to develop a technique which combines local thermal sensing with the measuring capability of a microscope — we call it scanning probe thermometry.”

How it Works: A Scanning Probe Thermometry

The most common technique to measure temperature on the macroscale is to bring a thermometer into thermal contact with the sample. This is how a fever thermometer works. Once it’s placed under our tongue it equilibrates to our body temperature so that we can determine our temperature at a healthy 37 degrees C. Unfortunately, it gets a little more challenging when using a thermometer to measure a nanoscopic object.

For example, it would be impossible to use a typical thermometer to measure the temperature of an individual virus. The size of the virus is too small and the thermometer cannot equilibrate without significantly disturbing the virus temperature.

As the scanning probe thermometer and the object cannot thermally equilibrate at the nanoscale, two signals are measured simultaneously: a small heat flux, and its resistance to heat flow. Combining these two signal the temperature of nanoscopic objects can then be quantified for an accurate result.

IBM scientist Dr. Bernd Gotsmann and co-inventor explains, “The technique is analogous to touching a hot plate and inferring its temperature from sensing the heat flux between our own body and the heat source. Essentially, the tip of the probe is our the hand. Our perception to hot and cold can be very helpful to get an idea of an objects temperature, but it can also be misleading if the resistance to heat flow is unknown.”

Previously, scientists weren’t accurately including this resistance dependence; but only measuring the rate of the thermal energy transfer through the surface, know as heat flux. In the paper, the authors included the effects of local variations of thermal resistance to measure the temperature of an indium arsenide (InAs) nanowire, and a self-heated gold interconnect with a combination of a few-miliKelvin and few-nanometer spatial resolution.

Menges adds, “Not only is the scanning probe thermometer accurate, it meets the trifecta for tools: it’s easy to operate, simple to build, and very versatile, in that it can be used to measure the temperature of nano- and micro-sized hot spots that can locally effect the physical properties of materials or govern chemical reactions in devices such as transistors, memory cells, thermoelectric energy converters or plasmonic structures. The applications are endless.” 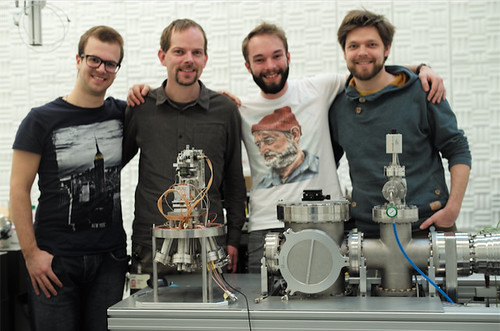 It’s no coincidence that the team began to see improvements in the development of the scanning probe thermometer 18 months ago when they moved their research into the new Noise Free Labs — six meters underground at the Binnig and Rohrer Nanotechnology Center on the campus of IBM Research-Zurich.

“While we had the benefit of this unique room, the technique can also produce reliable results in normal environment,” said Menges.

“We hope the paper will produce both a lot of excitement and relief for scientists, who like us, have been searching for such a tool,” said Gotsmann. “Similar to the STM, we hope to license this technique to tool manufacturers who can then bring it to market as an additional function to their microscopy product line.”

The scientists would like to thank the 7th Program Framework for its support under the NANOHEAT project and the Swiss National Science Foundation.