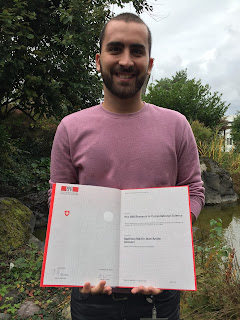 Name: Matthieu Simeoni
Location: IBM Research – Zurich
Nationality: French
Focus: Big Data Analytics
In 2012, IBM and ASTRON, The Netherlands Institute for Radio Astronomy, embarked on an ambitious project they named DOME to research extremely fast, but low-power exascale computer systems targeted for the international Square Kilometre Array (SKA) telescope.
Due to the petabytes of data collected by the SKA from deep space the DOME scientists are investigating emerging technologies including photonics, phase change memory, and streaming analytics that will be required to read, store and analyze all the raw data that will be collected daily. Linking everything are the algorithms themselves, and what works in one instance does not necessarily scale. Thus one team takes on the challenge of fundamentally changing the data acquisition and processing, making the data less astronomic (in quantity) as it were, with already quite some success.
One of the scientists on this team is Matthieu Simeoni who recently was recognized with the IBM Research Prize in Computational Science for his master thesis, undertaken at EPFL. This prize promotes research in computational sciences and recognizes outstanding projects focused on advanced modelling and simulation methods or their applications to important topics in diverse areas of science (physics, chemistry, and biology) and engineering.
I recently spoke with him about his research.
Congratulations on your award. Can you tell me what it recognizes?
Matthieu Simeoni (MS): The DOME project is made up of several work packages including “Novel Algorithms”, which is focused on developing efficient algorithms for the processing of the astronomical amount of data produced by modern radio interferometers. This data, not including the noise, is coming from the original Big Bang from 13 billion years ago and in it lies the answers to fundamental questions about our universe.
In my master thesis, we proposed a new imaging pipeline, with higher accuracy and up to 30 times faster than the current imaging pipeline — this is what the award recognized. The imaging pipeline was tested in realistic scenarios, using simulated data from the LOFAR telescope, an SKA pathfinder.
As a side note, I didn’t even know I was winning the award until I was called on stage. It was a complete surprise.
What was the biggest challenge?
MS: We started with a clean slate, threw away conventional thinking and targeted what some perceived as radical ideas, but that was the easy part.
Astronomers, like most scientists, don’t take change easily and they have been using their current algorithms for decades. So the biggest challenge will be to get them to use our techniques which is why we are building up enough evidence to position it as too good to pass up. And the beauty behind our algorithm is that it scales very nicely. We’ve already had very good success in scaling it over the past four months.
How did you find out about the DOME project?
MS: It’s actually a funny story. Two years ag
o I, along with three of my classmates from EPFL, organized a solidarity trip to South Africa. The goal was to go and meet children from impoverished communities to teach them mathematics using games and activities, in the hope that maybe we could inspire them for the future. You can watch a video of our trip here.
During one of our days off, 24 EPFL students took a ride to the Meerkat telescope construction site, in the desolated but incredibly beautiful region of the Northern Cape, at more than 650 km from the city of Cape Town. I was completely fascinated with the technology.
A few months after this life-changing experience, I met IBM scientist Matteo Cossale, who is working on the microservers for the DOME project and he told me about IBM’s involvement. I applied right away and spoke with IBM scientist Paul Hurley who eventually found a position for me on the team.

Cognitive Assistant for the Visually Impaired