A rapid rate of discovery 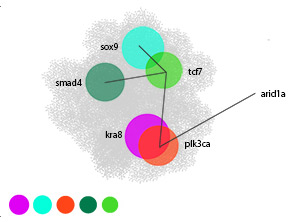 The average scientific paper is, well, long. And a new one is published every 30 seconds. Even the world’s best speed readers can’t keep up. Thanks to the IBM Watson and IBM Research-Almaden teams, as well as partners like the Baylor College of Medicine, Watson Discovery Advisor can do all that page turning – learning and understanding along the way – to help life science and pharmaceutical experts access and understand the latest and most-relevant research related to their domain of expertise.

Because Watson can read millions of documents in seconds, Discovery Advisor can cross-reference things like drug interaction and disease symptoms – and return not just every piece of related evidence, but visualizations that explain trends in the data, and offer hypotheses for a researcher’s query.

Together with domain experts we have trained Watson to recognize some of the fundamental concepts in life sciences research, such as genes, drugs, and diseases. Watson can understand the various names that these entities go by, including a wide range of international brand names and code numbers, so it can, in seconds, retrieve all the relevant evidence in the literature for an entity of interest.

More importantly, Watson understands the relationships between these entities by reading and interpreting the literature. For example, it can rapidly return all documentary evidence describing genes that regulate a disease like Alzheimer’s, and summarize this information with intuitive visualizations.

Watson can also reveal patterns in the evidence, and by comparing the entities make predictions about potential connections that aren’t currently described in literature. It’s constantly learning as we provide more and more expert data and literature to ingest and cross-reference. Life sciences is just one of the domains in which we’re already seeing huge potential for this kind of cognitive discovery advisor.

There are more than 70,000 scientific articles about the tumor-suppressing protein p53, often referred to as “the guardian of the genome.” The p53 protein reacts to the detection of genomic problems by increasing the expression of hundreds of other proteins to try and fix these issues, and can even instruct potentially harmful cells to destroy themselves.

It gets these calls-to-arms from another set of proteins that chemically modify p53 in response to particular biological conditions. But when Baylor and IBM started work on the challenge of understanding p53, only 28 proteins that perform that specific “phosphorylation” modification on p53 had been discovered – over the last 35 years of scientific research. By putting Watson to the task, it was just a matter of weeks before the teams had discovered and validated five more potential candidates in laboratory experiments.

You know what I mean? Watson does.