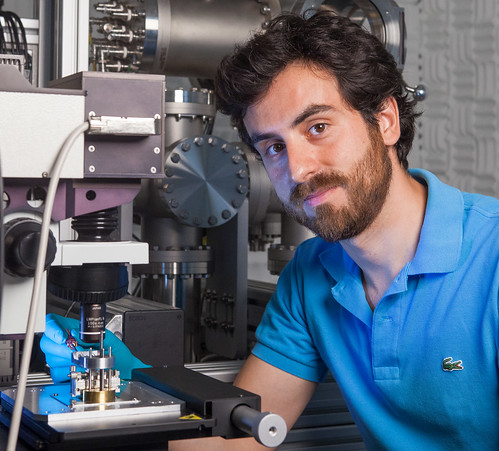 “Some kids grow up and want to be a fireman or police officer – When I was kid, I wanted to be a scientist. Later on I wanted to become an architect or a designer – I loved the creative side of both – but my parents suggested that I should be a chemist or physicist. They thought it wasn’t normal for someone so young to be so strong in these areas. Years later I started working in a clean room in Sweden and for the first time I felt that I made the right choice. It may sound crazy, but I feel at home in a laboratory.”

“What fascinates me the most about science is that it is not based on any one individual — it’s a collective contribution. What I discovered in my most recent Nature Communications paper will hopefully lead to another discovery years from now. In that sense, science is a giant puzzle without fixed borders and each time we publish we add one piece to the picture. 150 years ago James Clerk Maxwell described for the first time the physics of light and today we are manipulating light to send data at the nanoscale. Thousands of publications had to happen to reach this point. It’s inspiring, crazy and not far from being magical.”

“I applied to the IBM Research lab in Zurich five times over two years. Finally, my persistence paid off after emailing Heike Riel, who is now an IBM Fellow. But this taught me a lesson, which is applicable to any aspiring scientist — be persistent. Whether you are having challenges with a difficult experiment or dealing with a referee who keeps refusing your paper, don’t give up and push yourself.”

Last week Giorgio was awarded a 5000 CHF ($5600 USD) prize from the Swiss Physical Society for his his outstanding scientific achievements investigating the effect of strain on semiconducting nanowires, which can make it possible to transfer data between chips at the speed of light.

Read Giorgio’s publications and connect with him on LinkedIn.

Smaller chip with bigger bandwidth, thanks to E-Band and SiGe