Exfoliating wafer-scale graphene down to one layer

Editor’s note: This article is by IBM Research scientists Jeehwan Kim and Hongsik Park, who work in carbon electronics.
Grapheneholds promise as the linchpin material for breakthroughs in everything from high-frequency transistors and photo-detectors, to flexible electronics and biosensors because of its supreme electrical, optical and mechanical properties. And while some labs, IBM included, have been able to demonstrate its abilities in high-speed transistors, the performance is still limited by the quality and size of graphene. The extremely high fabrication cost for high-quality graphene is also another hurdle for many of these potential applications.
Our team at IBM’s Thomas J. Watson Research Center is getting close to making this feasible, as we are the first to successfully develop a reproducible technique to fabricate single-oriented, single-layer graphene at wafer-scale.
Two-dimensional semiconductor materials need to be a perfect single layer so their unique properties can be harnessed. In our paper “Layer-Resolved Graphene Transfer via Engineered Strain Layers” – published in Science this month – we used the idea that every element in the periodic table has a different adhesion (atomic binding energy) to graphene in order to produce single-oriented, single-layered graphene at a wafer-scale.
From sub-millimeter flakes to 4-inch wafers
For high performance device application, graphene – which looks like a 2D honeycomb of crystalline carbon atoms – must have uniform orientation and thickness. So, the atoms in a sheet of graphene must be aligned and “smoothed” to a single atom.
The realization of large scale oriented graphene has been a hot research topic for more than a decade. But since the first demonstrations of removing graphene from graphite, by using the so-called “scotch tape method” of peeling away the graphene, the size of single-oriented graphene has been limited to less than a square millimeter – too small for real world use. Our new techniques, though, show how it’s possible to break through this decade-old barrier and make 100 millimeter diameter wafer-scale sheets of graphene (4 inches).
To do this, we exfoliate the graphene twice. The first exfoliation separates graphene from a silicon carbide (SiC) substrate by usinga stressed nickel layer. Once this step is completed, we perform a second exfoliation that removes any graphene in excess of a single-layer by using a thin gold layer – thus leaving only single-layer, single-oriented graphene. 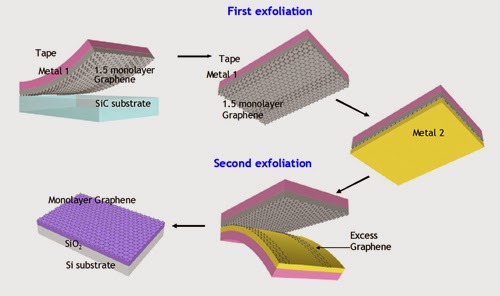 IBM Research’s earlier work on a gr
aphene transistor did produce the world’s fastest graphene transistor (reaching 100 GHz) by using graphene formed on SiC. But the graphene was restricted to an expensive SiC substrate in the lab previously, unable to be cost-effectively mass produced.
Our technique sets the graphene free.
Just being able to reproduce the separation of graphene from one SiC wafer over and over again will immediately lower the cost, as the graphene won’t depend on the SiC substrate for use in transistors. Also, the active graphene device area, when on SiC, is restricted to just a few micrometers because multiple layers of graphene impede performance. Now, we can “grow” single-layer graphene to much larger, usable, sizes.
According to Nature’s 2012 “Graphene Roadmap,” current transistor performance will top off in the year 2021, but the progress of graphene in the next generation of transistors could not only pick up where silicon will leave off, it could deliver up to 1 THz of high-speed compute operation over the next decade.
Read Layer-Resolved Graphene Transfer via Engineered Strain Layers by Jeehwan Kim, Hongisk Park, Jim Hannon, Steve Bedell, Keith Fogel, Devendra Sadana, and Christos Dimitrakopoulos.

Understanding the brain through cognitive computing

Creating something from nothing