Q: What originally brought you to the IBM Research – Zurich Lab?

After my apprenticeship as a mechanic, I applied for an opening. At my interview, they gave me a tour of the labs, and wow! In this one lab, it was rather dark and there was this bright green laser, cables everywhere, high-tech installations connected to the optical bench—right out of a science-fiction film. I felt like a kid in a toy shop! To be able to work in such a place! It was my dream job. 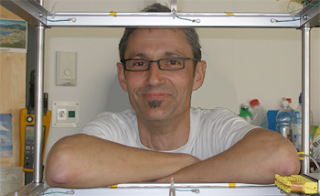 There are so many factors that have made it attractive throughout the years. First of all, IBM provided the support to get my engineering degree, which is something not all employers do.

The working conditions in terms of lab equipment are sensational. You really get what you need to do your work efficiently.

IBM is also a very environmentally conscious company, which is something that is extremely important to me personally.

Q: What have been some other highlights of your career?

When I joined IBM in 1987, Alex Müller and Georg Bednorz had just won the Nobel prize for Physics, only one year after Heinrich Rohrer and Gerd Binnig had won that same prize. The atmosphere was electric and it was an exciting time. Although IBM had a fairly strict no-alcohol policy at the time, they served champagne at the celebration in our cafeteria for us employees! So I had the impression that this kind of thing happened all the time—at least every other year or so.

A personal highlight was my first patent for an optical antenna, which I filed together with two colleagues in 1995. I never would have expected to become a patent holder, to be an inventor.

Q: Who had the greatest influence on your career?

That would definitely be my friend and colleague Andy Bischof because he motivated me to get my engineering degree. He was going to an info evening and talked me into tagging along. We both enrolled and I’ve never regretted it. The degree gave my skills much more depth than if I had become only a Swiss federally certified technician as I had originally planned.

I’ve also enjoyed plenty of support from my management, especially in connection with my studies, as I mentioned before. I’m very grateful for that.

(Laughs) Sure. I remember when I first started at IBM, I had only a vague idea of what computers are and what they do, what they’re good for. There were two PCs and a VM terminal in the lab where I worked, and my manager handed me a DOS handbook and said, “Go ahead, start using them, you can’t break anything.” So I began to work through the handbook with the intention of learning all the commands from A to Z. Well, I got as far as “F” because when I happily tried “Format :C”, which is of course the command to reformat the entire main C disk, I killed the machine. I knew I had stepped in it when the PC support guy arrived and just said, “Hmmm.” But in the end, he was able to save and restore most of what I had destroyed. That was my first shock on the job—you can very well do damage with a computer.

Oh, and I’ll never forget the time, in my second lab, when we were building an ultrahigh-vacuum system. We’re talking about a very complex, sophisticated piece of equipment costing over half a million dollars. We fired up the system for some initial testing, when a colleague who will remain unnamed—you know who you are!—sauntered in and caught sight of the red emergency stop button, which was just hanging temporarily from the wall. You guessed it: with those famous last words, “What’s this button for?” he pressed it and SHUUUuuuummmmm, the machine proceeded to shut down like the turbine of a jet aircraft. Had the turbomolecular pump been damaged by the drastic pressure difference, causing a backflux of oil into the system, it would have taken weeks, even months to remove all the residue and restore the system. A disaster! Luckily, the damage was minimal, and we had the system up and running again in a couple of days.

Talk about a kid in a toy shop…

Q: What advice would you give a young person getting started in your profession today?

#1: Never say “No”—don’t even think it—until you really understand what’s being asked. Listen carefully and give it some thought before you ever say “No” or “I can’t”. My personal approach has always been: “Kann ich nicht, gibt es nicht”. (There’s no such thing as “I can’t.”)

#2: Don’t bad-mouth a colleague. You might end up working together.

#3. There’s always a humorous side to things—look for that silver lining.

IT Nobel Awarded to IBM Researcher