The Higgs boson is the only particle predicted by the Standard Model of particle physics that has not yet been observed experimentally. Its observation would be a major step forward in our understanding of how particles acquire mass. 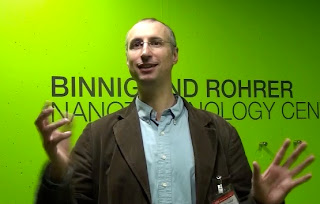 Recently, Prof. Dr. Ivica Puljak who works at CERN and University of Split, visited IBM Research – Zurich for a lecture.  Before leaving he took a few questions (video below)
Q. When you introduced yourself this morning, you said you’ve always wanted to visit the IBM Research – Zurich Lab. Why is that?
Ivica Puljak: Well, first of all I’m fascinated by the science pursued here in general and by nanotechnology in particular. I’m a lecturer of general physics and modern physics, and I often lecture on scanning tunneling microscopy (STM). It’s such a simple concept, very easy to understand, and the fact that it allows atoms to be moved around is just amazing. This being the birthplace of STM, of course I was keen to come and visit some colleagues and friends here.
Having toured the Binnig and Rohrer Nanotechnology Center today, what is your impression?
I.P. I’m very impressed by the scientific facility here. It’s equally impressive with that of CERN.
Tell us about a typical day at CERN.
I.P. Well, that depends on the time of year and on the year itself. We’ve been working on LHC [Large Hadron Collider] programs for over 20 years. During that time, there were more relaxed periods of designing the detectors. This was followed by more hectic periods of constructing the detectors, which was followed by even more hectic periods of testing what we had designed and built together with contracted companies. We couldn’t be sure that everything would even work. And it all works so well; only a few minor problems had to be solved.
Now we’re in a very exciting period again where—after 20 years of preparation—we finally have data to analyze. Last year, for example, there were phases where we barely had time to sleep, we were so busy preparing presentations of our data at major international conferences. So these are times of intense collaboration and discussions.
Can you describe the international aspects of your work?
I.P. It’s a truly global project. Someone is always up and working somewhere in the world at any time of day. For example, when we finish a day’s work, our American colleagues are just getting started. We share our results and other colleagues throughout the world continue the work.

There was recently a broadcast on the BBC about the Higgs boson particle, and several CERN physicists gave interviews in which they said they didn’t even believe it exists. Others argued that it’s going to be
within a very small realm. In your own opinion, who’s right?
I.P. (Laughs) Well, I’ll tell you what I would like to see: I’d like us to find it because I personally have been working on this for over 17 years. But science is not about beliefs, it’s about finding out what is going on in nature. We can believe what we want to, but nature will show us what there is. We can’t force nature to give us what we want!
Those who do believe it exists have made predictions about what its mass will be. Some say 135, some say 127 GeV/c2. What do you predict?
I.P. The realm has been so narrowed down that it’s awfully difficult to make an exact prediction.  Anything is possible within that narrow realm.
You mentioned data storage, and IBM is very active in that field. You said that sometimes data can’t be stored quickly enough, even on the most advanced IBM technology. What do IBM scientists and engineers need to tackle in order to help CERN meet some of these challenges?
I.P. (Laughs) Well, I was half joking and I can only thank all the scientists who are doing this kind of work. But it is a real concern. In fact, when work started on our project 20 years ago, scientists actually tried to predict what technology would be like today. They basically just extrapolated the technology of that time. However, today’s technology far surpasses what they predicted, so we can save much more data than originally thought, and this is very good news.
As we upgrade our systems, we will definitely need improved technology in the next 20 years. We sincerely hope that progress will continue to be made, and this is what we would like to see from your IBM Research Laboratories.