Debater went to the movie – and now into business 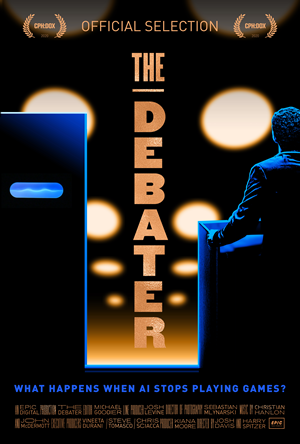 Artificial intelligence has been on a seemingly unstoppable march. Human champions have been bested at checkers, chess, go, poker, and Jeopardy. But all those are games – with rules and clear scores.

So, what happens when AI ventures out into the real world of human discourse and acts more like us? Where you don’t know what you meet around the corner, and where there may be no right or wrong – just pros and cons, and your sound judgment? That’s why we developed the Debater – to be able to meet and argue on any topic thrown at it under the sun….

This week, we broadcast “The Debater” movie at the film festival CHP:DOX.

The Debater movie is a rare, behind-the-scenes look at the maturation over almost 7 years of R&D work into a powerful new artificial intelligence. It tells the story of an eclectic team of researchers that dared to take on a so-called grand challenge – a challenge you think is almost impossible to solve and you have no clout how to get there when you start.

In the movie and in the following panel debate, some of the difficult areas in interacting with humans are revealed: For instance, that humans are rarely convinced by evidence or rational argument. Working with and convincing humans are also about understanding how to connect with them in different ways, some of which are not as rational as others. Just as important as being able to know the facts, it is about understanding and adhering to the values, the morals and ethics of the humans (the audience) that the AI should support or convince. Without that, it is very difficult to gain humans’ trust. Harish – Debater’s human opponent and champion debate – was very surprised to learn that Debater could use moral arguments and rhetoric.

Apart from achieving new milestones in NLP (intelligent understanding and generation of natural language), the debater project has also led to a number of other very important outcomes for AI.

The Debater demonstrated drew knowledge and arguments from far more sources than humans could ever do.  In the movie, the knowledge base consisted of 400 million articles, 1000’s of generic arguments, and understanding of concepts – something that is easy for humans but very difficult for machines. Furthermore, it had to identify relevant arguments that supported its point of view and finally bringing it all together to construct a cohesive narrative. All that just in seconds.

Another capability that evolved during the development, in an attempt to make better connections on an emotional level – is to show some personality. As an example, by using humor, sarcasm, etc. But in context and at the right, acceptable level. Something you can also see debater do.

Important NLP capabilities from Debater have already been integrated into Watson services, such as Watson Assistant, Watson Discovery and Watson Natural Language Understanding.

We are now exploring further use-cases with companies and organizations giving them early access for tests and development.

Obvious use-cases for Debater would be decision support in connection with:

The Debater is about helping us make better decisions — particularly in the era of fake news and ideology echo chambers.

Harish says in the movie: “It is fine to disagree, but it is not fine, not to listen to your opponent”. AI like Debater can help us do just that.

The Debater project is about building an AI that can objectively, transparently, in line with our values and ethics make us see both sides and help us make up our own mind an informed basis.  It is not about replacing human decision-makers but to help them make better decisions.

Check out: IBM Research: Project Debater to see debates, how it works, etc.

Stream the short movie on CHP:DOX: The Debater

If you have any further questions, please do not hesitate to contact me directly at andersq@dk.ibm.com