(5 min read) This #BlackHistoryMonth, IBMers are standing together. We’ve asked some IBMers to share with us their thoughts on inclusion in the workplace and their career journey. Kommy Weldemariam is Chief Scientist for IBM Research in Africa. Here he shares his experience with IBM so far and what inspires him as he seeks to solve societal problems through his inventions.

What was your journey to IBM?

I’m originally from Ethiopia and completed studies there and also in India. I later moved to Italy, where I was a PhD student and research scientist. There, I used AI for the development, evaluation, and formal verification of security/safety-critical systems (such as Electronic Voting Systems). I also spent a year as a visiting researcher in the Security Lab at the University of California, Santa Barbara. Here I focused on using machine learning and formal methods to verify and characterize voting systems security. Then I moved to Canada where I was an Adjunct Assistant Professor at the School of Computing, Queen’s University.

I joined IBM in June 2013, as one of the first employees in the research lab in Kenya. I was really keen to return to Africa and work on fundamental problems that require scientific innovation and discovery. Developing countries face a lot of unknown and life-threatening problems — health, climate, food security, cyberattacks — that I believe science can have a major impact on.

It’s been quite the journey growing this lab and building its identity. Six years in, I have learned a great deal. I’ve met with everyone, from people on the street all the way up to government ministers and presidents.  I have grown technically and personally thanks to the amazing culture at IBM, access to great mentors and role models, and collaborations with other business units. 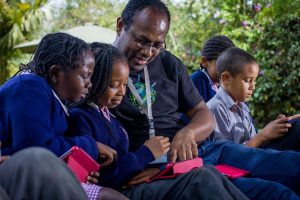 Tell us about your current role.

Today, I am responsible for most of the scientific and technical direction for the Africa labs. I am also responsible for executing on this direction. We are actively pursuing and applying research technologies such as AI, blockchain, and IoT to societal and enterprise problems within agriculture, healthcare, and financial services.

I am also the technical advisor to the lab’s director and technical lead on many client engagements.  An example is our work with the Bill and Melinda Gates Foundation. We are using machine learning techniques to tackle problems in three domains: Maternal, Neonatal, and Child Health (MNCH), family planning, and the eradication of malaria.

How many patents do you hold?

I have filed 150 patent applications in the last six years. 45 were granted and at least 11 are tied to blockchain inventions.

Tell us more about your patent that proposes using AI and blockchain to modify the behavior of autonomous vehicles. What problem is your invention helping to solve?

Today, autonomous vehicles are highly instrumented and use a lot of sensors to monitor driving conditions on a travel route within a specific distance. They are able to respond to their environment which might include nearby crowds and pedestrians, standing or moving objects. However, their responses are learned and modeled off previous examples and recordings.

We currently lack the capability to understand real-time and predicted behavior within a specific distance based on an assessment of conditions and how an autonomous vehicle reacts to those conditions. For example, it’s very common in Nairobi to see public transportation or law enforcement vehicles drive in the opposite direction of oncoming traffic. In India, it’s natural to see cows walking freely in the middle of a road.

What we’re trying to do here is use AI to predict the behavior of nearby drivers or objects. Then we can use that information to modify the behavior of the self-driving car to safely drive on the route before any potential casualties happen.

The role of blockchain in this scenario is to protect data privacy. In this case, we want to protect the information and data collected by the self-driving car, and the driver, while also modifying the behavior of the car based on the predictions of nearby drivers and conditions.

What advice would you give to a budding inventor?

Oftentimes, inventors face the tension between creating a patent, a business method and/or a scientific paper. My advice is to picture the problem you’re trying to solve and ground it in the real world. An invention should be practical and implementable. It’s one thing to create a patent that demonstrates a novel way to solve a societal problem. But for it to be sustainable requires the right business model. Inventing is a bit of an art, but with the right mentors to help you, inventing can become a regular part of your life.

What legacy would you like to leave behind with your inventions?

The purpose of my patent work is to leave behind inventions that bring a positive change to the world. Right now, I am very interested in the management of trans-boundary water use, using a distributed ledger and AI technologies. In countries like Egypt and South Africa, they rely on their bordering countries for their water. I am inspired by how we can use blockchain and AI to enable efficient, fair, and transparent use of a finite resource like water, farmlands, and energy for a sustainable future.

It’s Sometimes About That Little Extra—Advice for Future Interns

By Anne Leslie On paper, nothing predestined me for a career in cybersecurity. I graduated from business school with a dual degree in European business, spent several years working in banking, and the best part of a decade as a stay-at-home mother to my three kids before returning to work in a succession of business […]