The Girl Who Cracked the Code: Interview with the IBM Vault Winner

In September 2018, IBM hosted an online problem-solving game for students in the US. The IBM Vault was an interactive alternate reality game where players were given puzzles to crack “digital locks” over a period of three weeks. Only those who solved each lock in the least amount of time would move up in the leaderboard. If not, they were eliminated from the game. In the end, the top 75 fastest players were invited to participate in the final challenge at IBM’s Security X-Force Command Center in Boston, Massachusetts.

Keni Mou, a graduate student majoring in Operations Research at Columbia University bested thousands of challengers and won the first place in the competition and successfully secured an offer with IBM after. We held a Q&A session with Keni to understand how she found out the competition, what she felt as a female in the tech field and of course, her future with IBM. 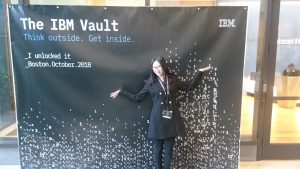 How did you hear about The IBM Vault and what made you sign up?

I was looking for job opportunities on Handshake (an online recruiting tool for universities) and The IBM Vault event appeared among those job postings. I had never done anything similar, but it seemed fun, and since I didn’t have much coursework this semester, I decided to give it a try. At first, I wasn’t planning on winning or going to Boston, I was simply curious about the challenges.

Can you tell us more about what the whole experience was like?

The overall experience was a mix of frustration, reward, and entertainment. The briefs were ‘geeky’, and reading other people’s posts on Twitter was fun. I think the way I solved the locks was kind of different from how they were intended to be solved. In the end, it taught me the power of collaboration.

When the first lock started, I was in a game theory course. When I got the decrypted numbers I was so confused. Then one classmate sitting next to me reminded me: hey is that the coordinates? And then I realized that, yeah that must be was the answer! The second lock is apparently to decrypt a cipher, but I found the twitter account by looking around the discussions on SNS. I even thought that the twitter account might be a trap and the account holder was trying to mess up the game. (Turned out I overthought it.)

The fourth lock was a psychologically hard one for me. I noticed the phone number but didn’t want to believe it because I did not feel that comfortable with calling a stranger. What if the other side picked up and blame me for random calling in? I even prepared for a script just in case.

The last lock was purely fun. I didn’t know JavaScript so went straight to the mainframe. It was almost a freebie.

Other locks were more or less similar. I talked to many friends even though they were not in the game. During breaks/lunches/random encounters, I introduced part of the challenges, told them my thoughts, and asked if they had any opinions. Surprisingly, people’s ideas were refreshing and they could always catch something that I missed.

What skills did you have to exhibit to solve the challenges?

Lock 4: Courage to call a stranger

Lock 5: Having a bookworm friend

As you can see, solving a competition like this is not just about having technical skills, but also about working with other people and being curious to try new things.

What was the most challenging part of the whole game?

For the fifth lock, it was almost purely my friend’s credit. I’ve never read “The Hitchhiker’s Guide to the Galaxy”, and I even didn’t know 42 was from this book. But after discussing with one of my bookworm friends, she immediately related the problem with the book, something I would never have been able to do myself! Having a diverse set of friends is also part of solving the challenges, especially if you lack knowledge in certain areas (LOL). 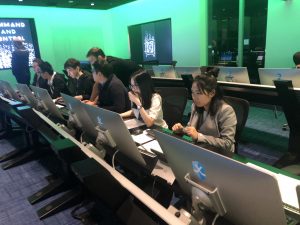 What did you learn from the experience as a whole?

Participating in this challenge allowed me to learn more about my friends/peers. Currently, I am in a graduate school where I feel it is harder to build strong relationships with peers than in undergrad. When we gather, in classes or social events, we usually talk a lot about academics, job hunting, and networking. The IBM Vault challenges were very useful topics for me to start a conversation and ask for deep thoughts.

Without them, I would not have been able to solve the challenges. While the ideas they gave me were refreshing, their thoughts were all kind of on different directions, and the diverse ideas were the key that I could win the competition, and also could have myself learned way more things.

Actually, I have never thought about this. I am in an engineering school, and I barely feel the disadvantage of being a female in this field so far. I felt I was at a disadvantage more because I am not a native speaker of English and it was harder for me to get the hints (puns).

Ultimately, I am in the tech field because I like it.

How did you react when it was announced that you were part of the 75 finalists going to Boston?

Tell us more about your experience when you got to the IBM center in Boston.

The X-Force Command center was really fancy, almost like in a movie. I didn’t have any knowledge of hacking or security, so I was very confused at first. With the help of kind staff members, I was able to do something and get some points. The learning experience was intense but it was very fun! I would never have another chance to do similar things.

In Cambridge, I was very excited to meet people from different departments and to be introduced to fancy and cool projects that were going on in the IBM research center. In particular, I met Michael, who was working on the JupyterLab – I use it every day, literally. 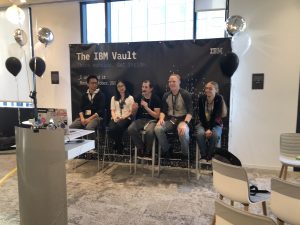 Keni (second from the left) and other finalists shared their experiences

How did you feel when you found out that you won?

Winning didn’t come as a surprise since I was at the top for quite a bit time. I planned my trip to visit my friends in Boston pretty early as well.

What was your reaction when you got the job offer from IBM?

I couldn’t be happier! Actually, after the Cambridge visit, even before my onsite interview, I thought that if I got into IBM I would choose to join. The whole presentation of the research center was very likable. After the onsite interview in Armonk, I confirmed that the job was exactly what I wanted to do for my career. Thus when I got the offer I almost instantly decided to accept it.

What are you looking forward to the most about being an IBMer?

I am looking forward to doing my favorite work and making an impact at this multinational corporation.

Some young women find it intimidating by the tech world, what advice would you give them?

I think currently the gender bias is becoming less and less of an issue. If you don’t think about it, it doesn’t exist. I have never felt there was any gender bias, either in my college, my graduate school or in the companies I interned with. If you really like technologies, you should just go ahead!

What advice would you give students today to win in a nationwide competition such as this?

Are you interested in having a career at IBM? Get the latest career information and job opportunities by joining our Talent Network!

Is Defining an Industry’s Future the Role of a Leader? Not at IBM