Jace Noteboom, a member of IBM’s Native American Diversity Council, worked with Lucy LePage from IBM Columbia to help further the partnership by bringing multiple teams together to facilitate events at HINU, STEM camps, coding camps at IBM and HINU and student visits and tour of IBM centers.

“We will soon kick off the IBM mentor program with HINU students,” offers Lucy LePage, a Global Program Manager for Automation in GTS Hybrid Computer Services at IBM. 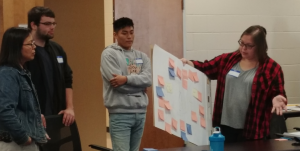 Students read out the efforts of their Design Thinking Empathy Map exercise during the October 2018 STEM Camp at HINU.

The STEM camps include design thinking and agile workshops to teach the students how IBM is using these tools to work smarter, solve problems faster with cross-functional collaboration and then applying these tools to hands-on activities with Raspberry Pi to build game consoles or speaker boxes. The real-life hands-on exposure to these activities sparked curiosity for many students.

The October STEM Camp included a two-day coding course in the evenings.  “We have wonderful volunteers at IBM with a passion to pique the interest of students into science, technology and engineering,” LePage complimenting the volunteers Will Jacobsen, Sage Izadi, Lara Haben and Brett Fairchild for the facilitation of the October STEM and Coding camps. “Will and Brett facilitated the Coding Camp in the evenings to gain more student interest in the IT field.” 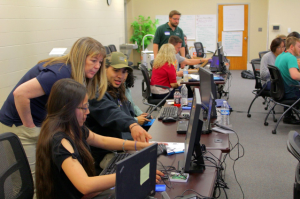 The IBM on-site visit included panel discussions with Project Managers and Technical SMEs in the IBM Columbia office, followed by an afternoon of hands-on training learning Linux, Python and practicing various commands with Will Jacobsen, IBM’s upskilling trainer. After the event, the students participated in a retrospective session to provide feedback with the most common theme being that “everything about the day was excellent!” 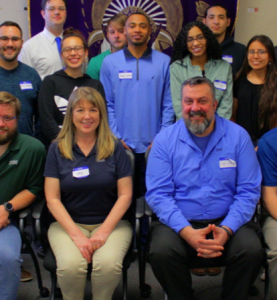 Seated in the front row are Lucy LePage and Sage Izadi from IBM, Jamal Jones (center blue polo) during the April STEM Camp at HINU.

“The overall feedback from the students has been very positive,” said LePage. “It is a great opportunity to nurture partnerships with our local college and universities. Haskell Indian Nations University does not have a Computer Science Degree and the students are eager to learn more about IT. IBM’s partnership will develop opportunities for these students to get exposure and training to the IT industry,” Lucy LePage further explained. LePage has plans to coordinate 3-5 events each year at HINU.

As a result of the work we have done at HINU, LePage was invited to attend the American Indian Science and Engineering Society (AISES) Conference in October and was asked to speak to the AISES leadership about the work IBM is doing with HINU.  “IBM is now looking at mirroring the work IBM Columbia volunteers have done at HINU at other tribal universities” LePage included. Further stating, “I look forward to sharing our work in hopes that we can influence more diverse populations.”

In an email thanking IBMers for the partnership, Angelina Adams, HINU Career Counselor stated, “By building better lives, we are building stronger families, which leads to stronger communities! This ultimately leads to a better world for all of us!”

Interested in working at IBM? Sign up for IBM’s Talent Network. We’ll keep you up to date regarding upcoming events and career opportunities that match your interests.