In the world of resumes, Yeshe Wingerd definitely qualifies as having an eclectic career path.

At first glance, you might think he’s commitment-phobic, with stints in Sonoma Valley winemaking, music school in Spain, and a six-month web development bootcamp.

But look a little closer and it’s clear that this San Francisco native has just been chasing his passions toward IBM, where he now works.

How did he make it all happen? Here’s a breakdown of his career journey.

“If you asked me two years ago if I could see myself getting into what I’m doing now, I would have laughed,” says Yeshe, who’s now a Front End Developer at IBM.

That’s because Yeshe majored in music and minored in philosophy at Colorado College. He never had a specific career path in mind, but made one commitment to himself: He’d take whatever steps necessary to discover what he was passionate about.

With that mindset, he graduated college and then took off to a flamenco school in Spain, where he spent two years learning how to play guitar for the popular Spanish music and dance form—something he always dreamed of doing as a kid.

After fulfilling that dream, Yeshe moved back to San Francisco to try his hand at teaching and playing flamenco guitar professionally.

Alas, a hand injury put a pause on that career path.

Undeterred, he developed a passion for wine and moved to California’s wine country to learn the ins and outs of the business. Soon enough he was in sales at a wine retailer in Berkeley—until it closed, prompting an existential career moment.

What would he do next?

As fate would have it, Yeshe had a trip booked to visit a musician friend in Denver, Colorado. During that trip, the two started talking about career paths. That’s when Yeshe learned that his friend was enrolled in a web development bootcamp. He was immediately interested.

“I had the perception of web development being very math-oriented, but I discovered how much I like the creative aspect of solving a problem in a new [coding] language,” he says.

Not long after he was enrolled in a six-month bootcamp.

For their final bootcamp project, Yeshe and his classmates had to present to 12 different companies that were actively hiring developers.

IBM was one of them.

“We did speed interviews with the companies, and IBM said that they were looking for a front end developer on their design team,” says Yeshe.

Although he had gravitated toward front end development throughout the bootcamp, he hadn’t considered how design played into the field. That was enough to pique his never-ending curiosity, and when IBM offered him a job he accepted.

“I was surprised by how vibrant and creative IBM was when I interviewed,” he says. “It’s very cool to see the vibrant culture of design that’s spread throughout this huge company.”

When Yeshe reflects on his career switch, sometimes he can’t even believe where he’s ended up. And while he concedes he sometimes feels like a novice among experts, it never lasts very long.

From wine sales, Yeshe learned how to listen and understand people from all different backgrounds. Now that he works in design, he sees how those skills translate into understanding the user, having empathy, and being able to communicate with everyone he encounters.

During his time at IBM, Yeshe has worked on some amazing projects—like designing an online shopping experience for people with cognitive disabilities. To make that happen, he teamed up with IBM employees who are blind or deaf to better understand how they experience daily tasks and tackle the challenge of accessibility.

“That was the project where I realized the possibilities of the work I can do,” he says.

So, what’s in store for Yeshe?

“I’ve been surprised by my own direction,” he says. “When I decide to do something, it doesn’t feel like a decision—it’s what I have to do.”

If he were to make another switch far into the future, he says it would likely bring three of his passions—wine, music, and technology—together. And judging by the amount of innovation going on inside the walls of IBM, it’s likely he won’t have to go far to achieve that.

Ready to start your career at IBM? Learn more about IBM careers now.

IBMers are experts in nearly every technical scientific and business field. They are citizens of, and apply our expertise in, more than 170 countries. Yet they are united by a single purpose: to be essential. They do that by creating the most advanced technology to change how our clients work and run their businesses. And through them, IBMers change how the world works. 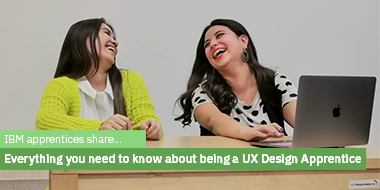 Everything you need to know about being a UX Design Apprentice

(8 min read) IBM Chief Executive Officer Arvind Krishna recently wrote, “To close the digital divide, pathways to fast-growing technology jobs should include non-traditional training programs such as apprenticeships...” So we spoke to Ana Manrique, Program Director of Design for IBM Cloud and Cognitive, and her team to uncover everything you need to know about […]