On this issue of the IBM Patent Leadership Series, we are featuring Heather Hinton, an IBM Distinguished Engineer, as she shares some stories about her experiences with ideas, interesting paths and problem-solving- that have led to granted patents. In celebration of International Women’s Day, we also asked Heather to talk about women’s progress, and what this means to her.

What does progress mean to you?

“For me, progress is when all people, not just women, have opportunities – opportunities to learn, stumble, grow and succeed. The ‘stumble’ part of this is what is so important. Too many women view failure as a disproportionately bad, career-ending thing, something to be avoided at all costs, even at the cost of success. Women’s progress means that we have “permission” to grow through positive and negative experiences; that we are in an environment that allows us to learn and use that to make ourselves better, stronger people.

“Personally, I have always had mentors, coaches, and sponsors who have helped me make opportunities. Most importantly, these colleagues have been there when I have stumbled and they have helped me turn that into the type of opportunity that makes me a better and stronger person. I have seen this with my friends and colleagues and so I know that this is not something “one off” just for me.  I have seen amazing women (and men) accomplish amazing things because of the strength of the IBM environment and IBMers in general.

“It is, in many ways, very difficult to compare women’s progress in the context of IBM to that of the ‘rest of the business world’ simply because IBM has always been a leader in this space. In my entire career at IBM, I have always had access to strong leaders from every “category” of person (gender, race, nationality, sexual orientation, year of birth, favourite hobby, left-/right-handedness, eye-colour, you name it).

“In this respect, IBM stands alone in my experience in being a place where what matters more than anything is your attitude and your ability.”

Heather is a fortune-teller. And animal tracker. 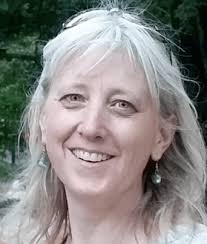 Heather can predict the future. Or, at least, she did that one time. Kind of.

“Have you ever been to a website where you’re doing stuff and it says, ‘You need to go create an account?’ But you really don’t want to create an account? And instead it’ll say something like, ‘Log in with Facebook?'” Turns out the patent behind the process that allows you to not have to create a new account was awarded to Heather and some of her colleagues. Over a decade ago.

A page from the book in which Heather tracks her patent ideas. At time of publishing, it had not yet been proven that visualizations made up of smiley faces lay foundations for the best patents, but all evidence strongly supports this theory.

“We all thought, ‘Nobody’s ever going to do this because there’s never enough trust in the world. But it’s a really cool idea.'” Heather compares this patent, one of 141 she has been granted around the world, to the ugly duckling. “Sometimes it’s the patents you don’t expect that are going to be the interesting ones.”

But why file a patent for an idea that you don’t believe will amount to much? “I’ve never seen a problem that I don’t want to solve,” Heather says. “You start solving problems in one area, and then—once you start getting them to a point where the path to complete the solving is very clear—you tend to find new problems.” Follow enough paths and maybe you’ve predicted a common web function ten years before its time.

Heather kindly shares her secrets for fortune-telling. First, identify the problem. “The trick is to know when your problem is just one we’ve made for ourselves, versus problems that are what I call, ‘real problems’… something that is systemic.” Second, gear up for the hunt. “Sometimes problems are like animals that you have to sort of track. And the way that I do that particular tracking of the animal is on paper.”

Before you know it, you have a visualization of your problems processes and interactions. “And that’s where you start to boil the problem down and get to the things that make a patent unique and defensible.” Now that you know Heather’s secret, what ideas do you have that will change the world in 10 years?

Heather Hinton is an IBM Distinguished Engineer and the Vice President for the IBM Hybrid Cloud CISO business. In this role, she provides technical direction, solutions and strategy for IBM Security Services, Cloud Security and Compliance solutions across the IBM Cloud Business Unit.

An Interview with Romy Newman