Five Talks Worth Spreading from TED@IBM 2017

TED@IBM is an annual event with talks exploring the relationship between technology and humanity. The most recent one was held in San Francisco last December 2017 with the theme “Why Not?” Madeleine Matthews attended the event, and shares with us her learnings and insights from her favorite talks. 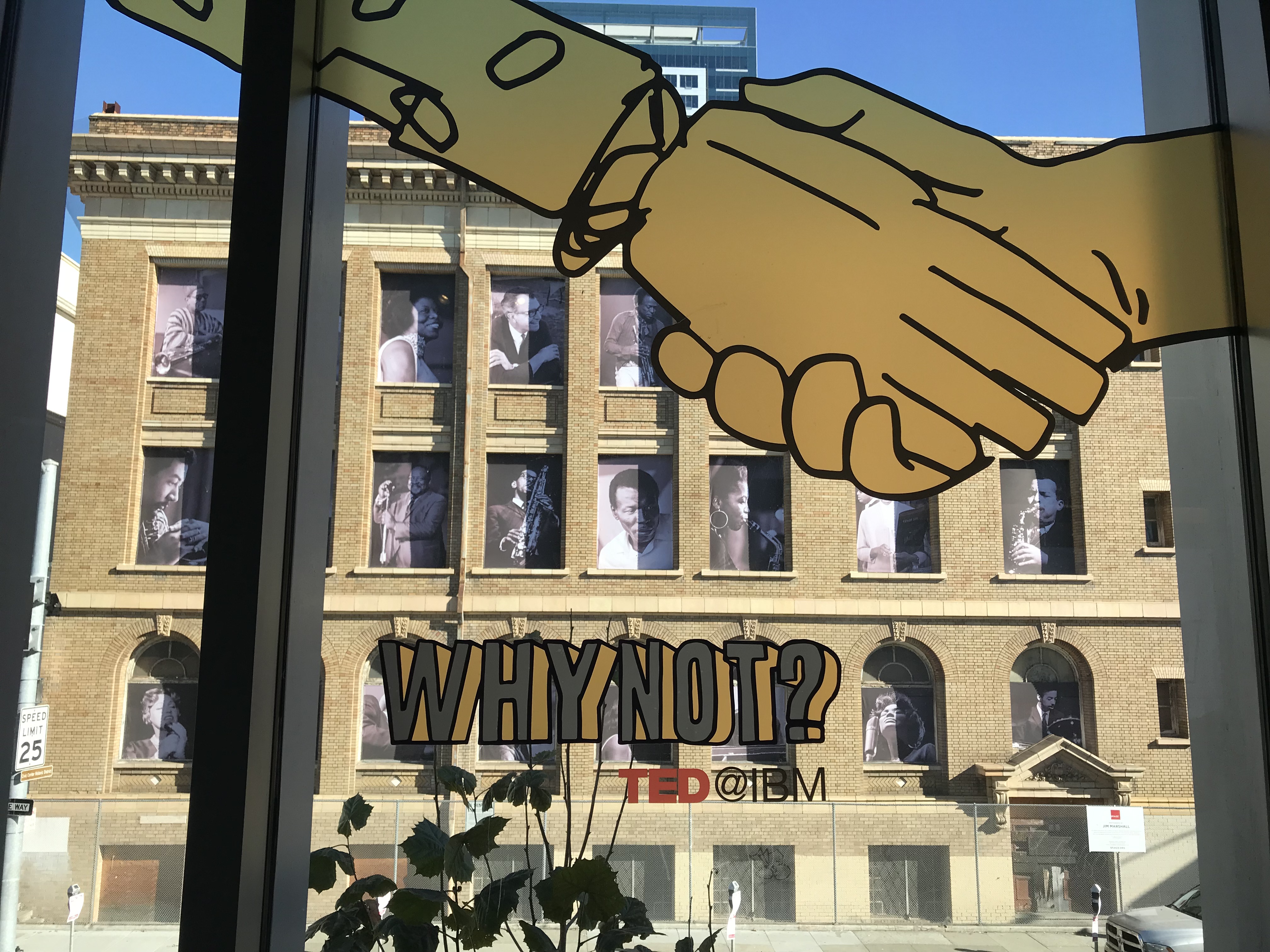 “Why Not?” This was the theme of TED@IBM 2017 which felt quite fitting, given how I got there. A month prior, I went to a TEDWomen viewing party hosted at my office (yes, we have events like this all the time!) and they raffled out free tickets to the TED@IBM Talk in San Francisco. “There’s no way I’ll win,” I thought. But ‘Why not?’ – they called my name and a few weeks later, I flew to SFO. And since I’m originally from the Bay Area, I got to go home a bit early for the holidays.

When I arrived at SF JAZZ on Wednesday morning, the venue was decked out for TED@IBM. It was big, spacious, and full of sunlight (gosh I missed California). People buzzed by in the traditional Silicon Valley uniform: jeans and a button down. (By the way, what passes for business casual in the Bay is hilarious to me after moving to New York…so much color! So little black!) I grabbed the free lunch, hit up the photo booth, and checked out the Live Muralist before heading into the theater.

I spent the next few hours listening to ideas from the brilliant minds of IBMers and other women and men in tech. It’s an amazing opportunity to explore what’s new at IBM—what my fellow teammates are working on, what puzzles they’re trying to solve, and what questions they’re finding along the way.

There were 17 great talks from different speakers, and you can watch the videos on the TED@IBM page.  The speakers were outstanding and the topics were interesting that it was hard to select the best ones – but for the benefit of this article, I am sharing my reactions and insights from five of my favorite talks, as well as the most striking quote I heard from each. 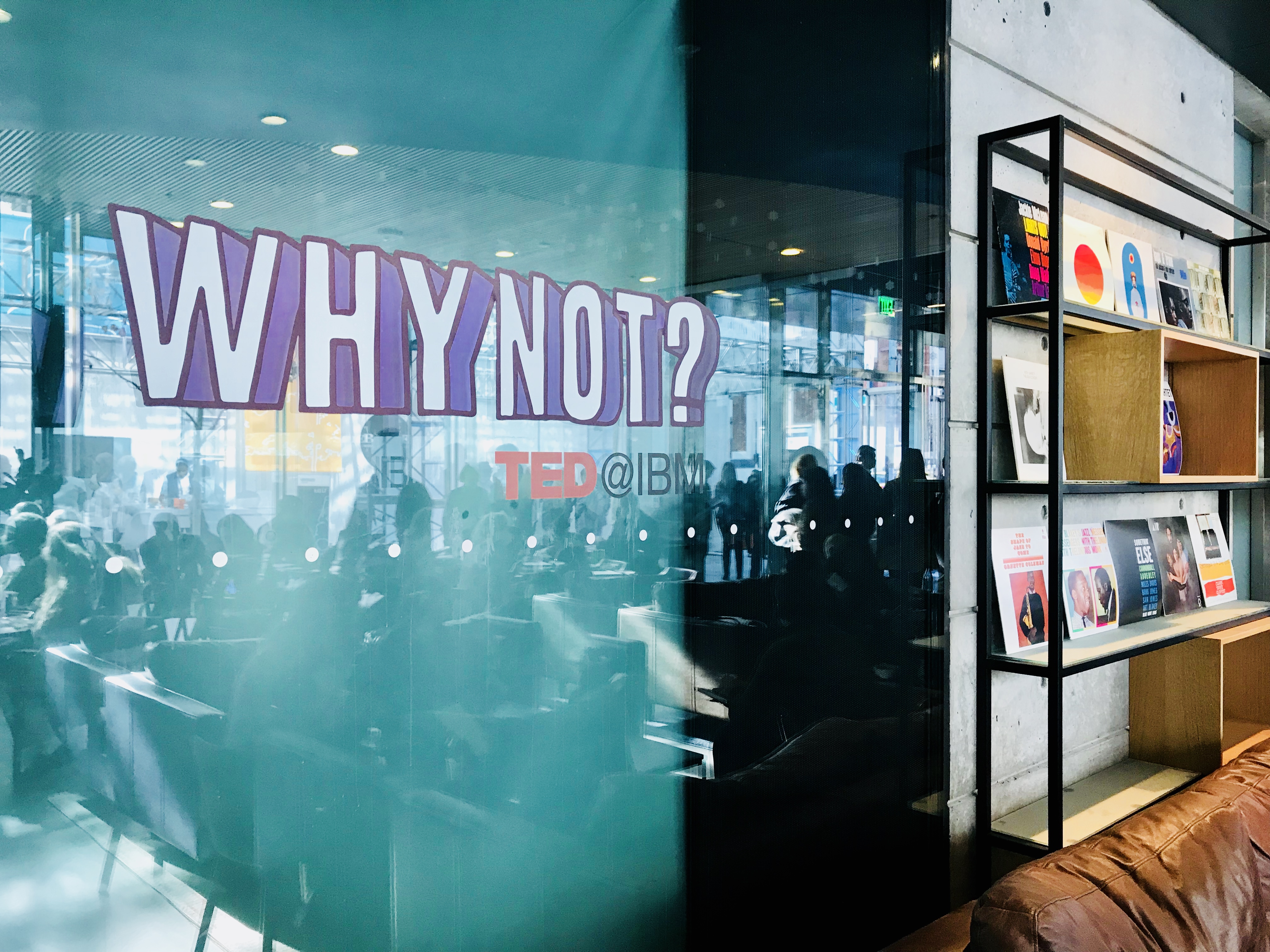 Robin’s talk was the epitome of a great TED talk: it made me think deeply and critically about something I never thought of before. She talked about AI, but unlike most techies there who boasted of AI’s capabilities, Robin took a step back and questioned how AI decision making might not be that unbiased and objective after all. Because all humans have unconscious bias (meaning we subconsciously stereotype), and humans are the ones building AI, we are therefore (unintentionally) programming bias into our data and algorithms. For example, some of the early facial recognition technologies failed to “recognize” people of color—not intentionally, but because they were based on data sets of mainly white people. But this is beyond just products: AI is currently being used in the criminal justice system to automate risk assessment. What if the algorithm you’re building is based off historical incarceration statistics, which incarcerated African Americans at a rate of 5 times that of white Americans? There is little governance on building AI to lead to unbiased and diverse results—and that needs to change. “Do we want AI to reflect the world we see today?” She asked. Or, do we want it to reflect what it could be?

Rana Novack, Refugee Advocate
“There’s no clear choice for refugees: either stay in a familiar world and risk safety, or leave with nothing… People lose their lives because they weren’t given a better decision.”

In one word, Rana’s TED talk was inspiring. As a Syrian-American, Rana saw the frustration, pain, and fear that her family back in Syria experienced during the recent migration crises. So, she created IBM’s Refugee & Migration Predictive Analytics Solution, one of the first programs to use technology to help refugees. It uses machine learning and cognitive computing to predict and respond to international migration crises. What happens if this border is closed? What happens if there’s a storm coming? All of these questions factor into Rana’s software. Governments will get the right information ahead of time, so that their responsive is proactive rather than reactive.

David Katz, The Plastics Alchemist
“Social plastic is the bit-coin for the earth, and it’s available for everyone.”

David’s organization, the Plastic Bank, is a brilliant solution that address both climate change and poverty. His ideas stems from the fact that the world’s worst pollution comes from the poorest countries. What if you could encourage those populations to recycle by monetizing it? The Plastic Bank is just that—a place where you can exchange plastic waste for things you actually need, like healthcare, clean water, and clothes. The notion of treating plastic as money is revolutionary.

Tanmay Bakshi, Cognitive Developer WHO IS 14 YEARS OLD.
“My wish is to help reduce teen suicide, via the power of Deep Learning technologies.”

Tanmay is 14, which made almost everyone in the theater feel slightly unaccomplished. Still, I loved his talk about how he’s using cognitive AI to help teenagers struggling with mental health. Tanmay wants to build a system that finds and responds to warning signs of suicidal teens by analyzing their social media. PS. I also heard Tanmay will be at Think 2018, IBM’s annual conference! 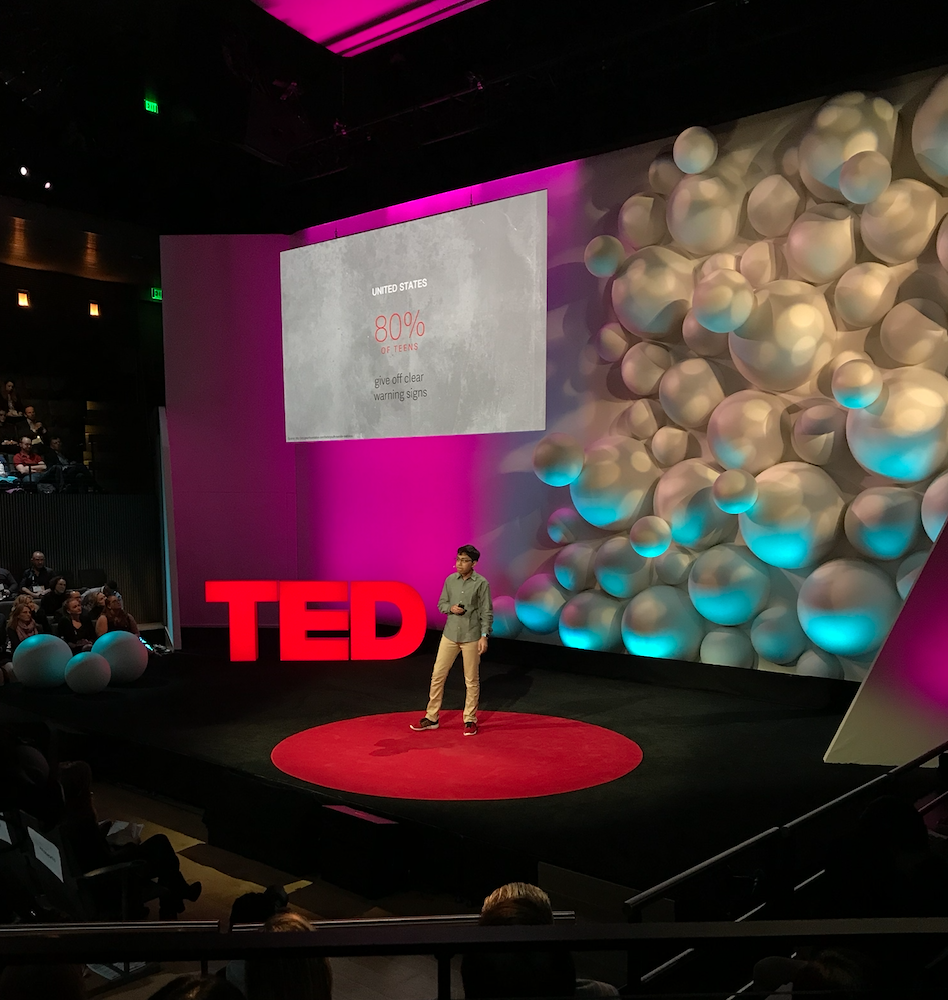 Lisa Feldman Barrett, Emotions Innovator
“Emotion detection systems are fundamentally asking the wrong questions… Emotions you detect in other people actually come in part from what’s in your own head.”

Lisa, a Distinguished Professor of Psychology at Northeastern University, made me miss college. Her talk was jam-packed with the most fascinating information on emotions—the (wrong) assumptions we hold about emotions and how these infiltrate our laws. We think of emotions as objective, hard-wired responses: like if a criminal apologizes, he should appear sad or at least frown. But what if he doesn’t “look sad” to you—does that mean he’s not actually remorseful? Lisa talked about how emotions are actually quite subjective. They are just “guesses” that your brain makes, constructed by your past experiences. So next time you don’t like someone’s emotional response—think twice! It might have more to do with you and what you expect.

Conclusion
I left the TED@IBM conference feeling energized and excited about my work. IBM is at the forefront of artificial intelligence and cognitive computing, and we’re building spectacular programs that can save refugees and stop climate change. But what makes IBM unique is that we don’t just build without thought. Unlike some other tech companies out there, we’re not afraid to ask the tough questions about who AI is built for, how it’s governed, and where it can go wrong. This mentality of innovating without sacrificing empathy is how you create technology that’s built for everyone.

If you are interested in finding out more about other technical opportunities at IBM, then follow our campaign at #IBMTechTalent

To keep up to date with our career opportunities and other IBM facts, connect with us on Facebook, Twitter, Google+ and LinkedIn.