Why everyone should be crazy for bots

Bots are the new “It” thing. Also known as chat bots, a web robot, or an Internet bot, bots are merely applications that are able to run automated tasks much faster and more efficiently than a human would. Everyone seems to have gone crazy for bots, and while the tech may seem new to most users, they have actually been around for many years.

What is a bot? A bot can be designed to do nearly anything. Things such as make a dinner reservation, order your birthday cake, or reserve an uber. Recode’s Kurt Wagner highlights the many tasks that a bot can take of and notes that it is most common for interaction with a bot to be with a chatbot that lives in a messaging app or service, such as Facebook.

Chris Messina – the inventor of the hashtag who now works for Uber – said that bots will not replace apps. He predicted the explosion of what he termed “conversational commerce” in 2015, shortly after launching the first bot in Facebook Messenger, which allowed users to call an Uber.  If you’re meeting your siblings for dinner, for example, according to Uber, you can send them the address in Facebook Messenger, and they can tap the address and order a ride. Hungry for a pizza at home? There is a chatbot for that too.

While the widespread use of bots is still in its infancy, Botlist is the bot store offering the best bots that can be used on platforms like Slack and Facebook. It’s still relatively new for Facebook, Twitter, and via text message, but the use of chatbots is growing. Unlike the chatbots of the past where conversations were forced, and the capabilities of the software not advanced enough to carry on a natural conversation, the chatbots of today can do nearly anything from ordering flowers to be delivered via 1-800-Flowers, to ordering a pizza from Domino’s or Pizza Hut.

What can bots do?

Along with ordering a ride or ordering a pizza, chatbots can do much more, such as give the user information about the latest headlines using the CNN chatbot, to get the weather, or to even book a hotel room. As chatbots become more intelligent and able to carry on a normal-esque conversation, they are being used across industries to improve the overall customer experience.

While still in their early stages of adoption, Lola will help to book a hotel room and comes to us from a former Kayak exec, there is also M, courtesy of Facebook and Viv, by the same creators of Siri. KLM Airlines uses Facebook to send updates to customers including confirmation of booking, boarding passes, and flight notifications, and Google has their “Assistant,” which, according to Kevin O’Rourke, Executive Vice President of Global Sales at SiteMinder, is the chatbot to watch when it comes to the travel industry and Google’s launch of the Trips app.

As interesting and high-tech as bots are, Neill Feather, president of SiteLock and a member of Forbes Magazine’s Technology Council, does acknowledge that there is some cybersecurity risk that should be recognized. According to Feather, bots have the capability to create very real problems for website owners from stealing content to taking entire websites offline.

Most bots are the “good” kind, the ones that gather data or help customers order flowers, hotel rooms, and pizzas without every having to speak to a live person. There are now hotels that even allow guests to request room service, fresh towels, and housekeeping via a chatbot. Yet, there there is also a nefarious side to bots that should, at the very least, be addressed.

Feather cites Brian Hughes of Moz who found that more than 35% of all bot traffic to websites are bad bots including botnets, spam bots, and website scrapers. Website scrapers can hurt SEO rankings because they duplicate information, monitoring the RSS feed to know when new updates have been made. Spam bots leave comments with links to promotional products, such as a free smartphone, and then steals personal information when the user provides their credit card information. Finally, there is the threat of a Distributed Denial of Service attack, which takes websites offline and can cost companies anywhere from $50,000 to more than $400,000.

This is not all bad news, there are ways to prevent or at least diminish the opportunity for a bad bot to wreak havoc. Having a plan in place, along with a web application firewall, and a website scanner, can help to reduce the harm done along with keeping all software and plugins updated can protect customers from negative experiences and businesses from costly attacks.

Regardless of good bots or bad bats, can you imagine a world where the intelligence of IBM’s Watson, a cognitive system enabling a new partnership between people and computers, is harnessed by bots? That’s beyond exciting for many, many reasons.

IBM World of Watson is a conference dedicated to Watson and what Watson can do for everyone; the technology platform that is designed to use natural language and which offers data analytics that are unrivaled among its’ competitors. Watson offers answers to your customer’s questions, can extract information from all documents, and can offer insights, patterns, and relationships across all types of available data. Setting Watson apart is the fact that the technology can analyze unstructured data such as news articles, research reports, enterprise system data, and social media posts; today more 80% of all data is unstructured making this capability invaluable. 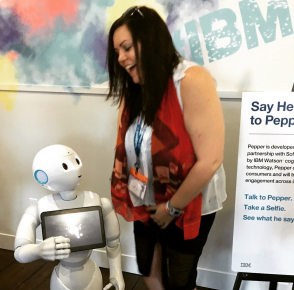 I’m attending the IBM World of Watson 2016 conference as an influencer and speaker from October 24-27 in Las Vegas. I will be speaking on a panel called The Internet of Now: Connecting Businesses, Bots, Things and People. As an influencer, I will be in a unique position to share my experience and expertise with those in attendance at the conference. My voice, in the form of blogs, tweets, video, podcasts and more, will be featured prominently throughout World of Watson and curated for IBM Watson IoT social networks.

How to put sustainability at the heart of your business

How to put sustainability at the heart of your business

How is SWIFT still relevant after five decades?

How does technology drive business transformation?

The next era in banking starts with reframing trust

How does technology drive business transformation?

The next era in banking starts with reframing trust

Why ISO modernization is so important for financial institutions

Cheat sheet: What is Digital Twin?

How the convergence of OT and IT is driving...

What is the Internet of Things (IoT)?