Cast your vote for the IBM Open Badge Program to win at the 2017 Learning Impact Leadership Awards. Created in 2007, the IMS Global Learning Impact Awards (LIA) recognizes outstanding applications of educational technology to address the most significant challenges facing education. Nominations come from around the world from organizations and institutions that meet the eligibility requirements.

The IBM Open Badge Program was launched in 2016 and it is already leading the IT industry in digital credentials. The program disrupted the IT certification space, winning the coveted 2017 IT Certification Council Innovation Award. Last year, more than 200,000 people from around the globe earned an IBM Open Badge. The Open Badge Program is increasing engagement, increasing leads and generating thousands of social media impressions, signaling the vitality of IBM’s programs and services.

IBM is a finalist, but we need your vote! Winners will be announced at the Learning Impact Leadership Institute on May 18, 2017, so vote now and share with your colleagues!

Please vote at http://ibm.biz/IMSawards2017 in the Blended Learning Optimization Category:

Insert this image into your tweets: 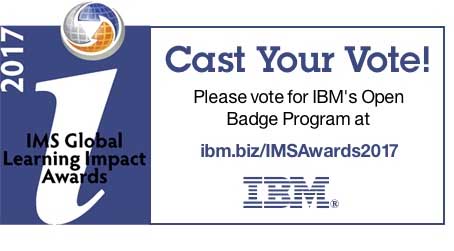 Here is a short video presented to the awards jury:

Updated! Getting to know our GTPs: Arrow Education Services

Big Data Certification and Your Paycheck 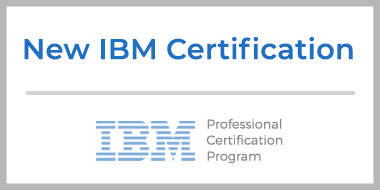 Your new IBM credential experience has arrived! www.ibm.com/training/credentials Announcing the launch of a seamless learning and credentialing experience. All that you need for your IBM skills journey is now in one place. Looking for certifications, certification exams, skill badges or recommended training? Leverage the new site navigation and search that significantly improves the time it […] 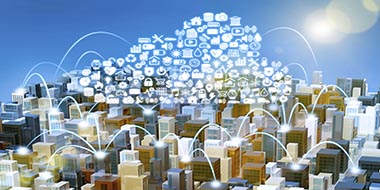 Interesting items on the web (January 2019) 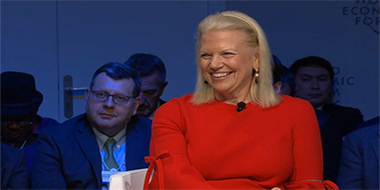 IBM at Davos: Business Leadership in the Fourth Industrial Revolution

IBM Chairman, President and CEO Ginni Rometty participated in a CEO panel discussion on Tuesday, January 22, on “Business Leadership in the Fourth Industrial Revolution,” which explored how economic opportunities today coincide with concerns over data privacy, the environment, market concentration and corruption. “The future of work is one of the most urgent questions of […]