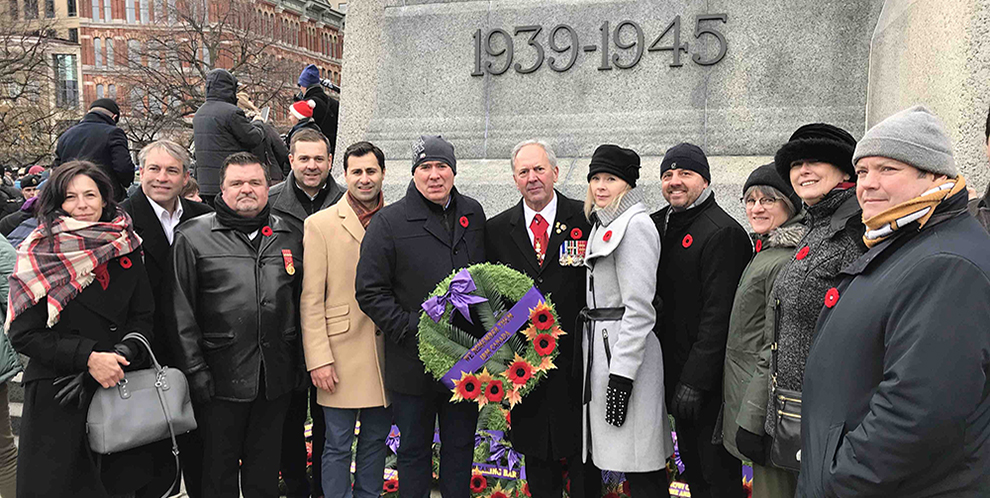 IBMers pay their respects at the National War Memorial in Ottawa on Remembrance Day 2019 by laying a wreath on behalf of IBM at the cenotaph.

For most Canadian veterans, retiring from military service doesn’t mean retiring altogether. In fact, Statistics Canada reports that more than half (57%) of Canadian Forces veterans transition to civilian careers following their military service. While finding the right job fit can be a daunting task, more veterans are recognizing IBM Canada as a place to advance careers in areas like cybersecurity, analytics and artificial intelligence.

“It is to the credit of IBM leadership to invest in me as a Veteran,” says Tony Battista, who joined IBM Canada in 2019 after a 40-year military career. As a Client Executive, Tony’s in-depth knowledge of the Department of National Defence, Canadian Forces, RCMP, Veterans Affairs, and broader Canadian Public Safety organizations allows him to provide innovative technology solutions to government agencies.

“By joining IBM, I was also keenly interested to learn from such an amazing technological company and to contribute to the safety and security of our country and close allies. It has been a wonderful opportunity all around,” says Tony, who rose from the rank of Private soldier to Colonel, eventually serving in senior military roles at NATO across Europe.

Arjun Grewal joined IBM in 2018 following a 19-year career that began with the Canadian Forces reserve Infantry in Toronto. Arjun’s deployments include deploying on Canada’s mission to Kabul, Afghanistan in 2003, earning his parachute wings, and his 12 years with Canadian Special Operations Forces in Ottawa, where he served five tours in Afghanistan and other engagements globally. Having worked closely with Canadian, U.S., and Allied security and law enforcement establishments worldwide, Arjun said that IBM’s reputation for being a problem solver on a giant global scale is something that stood out as he weighed his post-military career options.

“The Military takes leadership and teaming very seriously. We train and operate that way in everything we do, people make missions happen. IBM is very similar in that mindset with respect to the training and mentorship that is encouraged across the business at all levels,” said Arjun, adding that IBM fosters diverse career opportunities by allowing employees to grow within the company.

IBM’s focus on quality and mission are pillars that Arjun experiences daily as he works to improve the client experience across the IBM Cloud Platform. “I often recommend IBM to many of my friends and colleagues. Frankly, I do it every chance I get.”

Tony echoes Arjun’s sentiments, often telling his military colleagues that IBM Canada offers “truly boundless” opportunities following a life in uniform. “Without any doubt, I highly recommend a post-military career in the technology world to my colleagues,” Tony says.

Reservists like Laura Penner and Philip Fong are also building careers at IBM Canada. Laura, who joined the Naval Reserves at HMCS Malahat in Esquimalt, B.C. in the late 1970s, was one of the first female Naval Reservists to enter the Hard Sea Trades as a Marine Diesel Mechanic. Following a successful career in the Regular Forces as a Dental Assistant, Laura retired in 1992 to become full-time mother.

But in 2000, as she was job-hunting to re-enter the workforce, Laura discovered a second career as an IT recruiter and has never looked back. She joined IBM in 2008 and has progressed through her career where she is now a manager.

“Military veterans bring so much to the table besides discipline. At IBM, we’re working hard to be sure we find a way to help veterans translate their talent into a career at IBM,” she says.

Laura reflects that the military is a good training ground for IT skills, but often the transferability of those skills isn’t easily recognized. “I try to communicate this point when I speak to military classes, so that they can see past the trades and look at what they really do day-to-day, and understand how their experience translates to the IT industry,” Laura says.

Philip has taken a different approach, serving in the Reserves while working full-time at IBM Canada. He retired in 2012 from his position as a Health Care Administrator (HCA) Officer, after 12 years of service. Philip reflects that the leadership and management training and real-world experiences he received in the Reserves enabled him to augment and reinforce the skills he was acquiring as part of his career development with IBM, as he progressed from Project Manager to his current role as a Delivery Project Executive and people manager.

“The roles of an HCA and Project Manager are similar in terms of managing projects or missions with similar skills required of leadership and management of people in achieving a common goal,” Philip says.

While it can be difficult to transition from a military to civilian career, IBM prioritizes reskilling and upskilling opportunities to make these transitions easier for all IBMers.

“‘Civilianizing’ my people skills, management skills and learning new systems was part of the invaluable training the military provided when I was still in the forces,” Arjun says.” When I joined IBM, I noticed that the skills training opportunities were unbelievable. With access to online learning platforms, one can take their career anywhere. Being part of a large enterprise is an asset, not a deficit; there are opportunities to learn technical skills, management, design, sales, marketing, H.R. The list goes on. IBM may be a tech company, but not having a software engineering degree is not a confine.”

Tony adds that the “unlimited learning opportunities” at IBM have been beneficial to his career growth. “This said, there is no doubt in my mind that the broader, life-lasting skills that the Canadian Armed Forces provided me are even more important to IBM than any refocus on technical skills. It is a great convergence of the broader experiences and education acquired from my military life and the technological retooling offered by IBM. It is a win situation for the military, IBM, Canada and the individual veteran.”

IBM Canada provides education, training, and support to veterans with programs such as the Veterans Employment Initiative. The IBM Canada Lab is also involved with organizations like Coding for Veterans, which helps Canadian veterans and their families transition from deployment to employment and up-skill in critical areas such as cybersecurity.