From dreaming of NASA to wanting to change the world

Federation University Australia and IBM recently announced the recipients of IBM’s annual IT scholarship program. The scholarship supports students who are studying in-demand skills needed for Australia’s digital future such as artificial intelligence, cloud, and cyber-security. In a series of posts we’d like to introduce you to some of what we hope are the technology leaders of tomorrow. 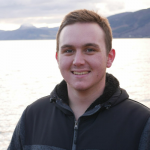 My name is Beau Nieuwveld. I’m 20 years old, living in Ballarat, Victoria. I’m originally from Hamilton, a small rural town in south west Victoria. After spending a year in Adelaide, I moved to Ballarat at the start of 2016 to be closer to family and enjoy the country lifestyle. For me, Ballarat is the perfect fit – peaceful without being too quiet, big enough that there’s always something happening, and of course the opportunities of Melbourne are only 90 minutes away.

When I was growing up, I wanted to be an astronaut for a long time – I was really interested in astronomy and could tell you almost anything about NASA. Later on, living next door to the local police station gave me an interest in becoming a police officer. In a small town with just one policeman and very little crime, I was really fortunate to see and experience the community service aspect of the job.

My hobbies include tinkering with anything and everything tech-related, as well as videography and playing music.

My parents owned and operated a post office in a very small farming community from 1996 until 2007. It was a huge career change for both of them when they started – my Mum had spent a lot of time working in pathology, and my Dad had worked extensively in the mining industry before arriving in Australia. In a way, we were the central hub of such a small town, and growing up in that environment meant I got to experience a wide cross section of the community. In the last few years we were there, I also experienced first hand the move towards email and online shopping, and how traditional retail outlets were forced to diversify in order to keep up. Over those 11 years, the post office gradually morphed into a bank, video rental store, information centre, internet cafe and gift shop, just to name a few.

Aiming to make a difference

As I grew up, my goals shifted from wanting to be famous and successful and having my name up in lights to something a little more realistic and down-to-earth that would make a genuine difference, somewhere, in some way. Being engaged with the community through the post office allowed me to realise how a little help can go a long way.

My goal is to make technology more accessible to the world, whatever that might entail. That could mean helping to migrate an underfunded not-for-profit to free and open source software solutions, so that expensive technology doesn’t prevent them from achieving their ultimate goal. It could mean that the remotest of remote islands has reliable technology infrastructure that improves the lives of its inhabitants (for example, I’ve seen first-hand the difference that a humble mobile phone can make to a rural village in Vanuatu). It could even mean ensuring that my local coffee shop doesn’t lose business simply because they can’t afford to accept payments on card. Technology can be both a great help and a great hindrance to the world and despite all the advancements we have made in the last decade, we still have a very long way to go.

Studying IT in Ballarat

I’d always thought that, unless you wanted to study nursing or agriculture, you had to move to a big city. So when I decided to move to a regional city and study IT, I was amazed at the number of opportunities available. There must have been a dozen different courses available either online or within an hour of my home – not even counting what was on offer in Melbourne. But ultimately, I chose Federation University due to the knowledgeable staff, the smaller class sizes and the very attractive partnership with IBM. No other university had such a deep connection with working industry professionals.

It is a challenging course, but it also depends on what you make of it and how you approach it. For example, while it’s often simple enough to complete a project to the exact required specifications, students often find that their methods and implementations are entirely different, and you can easily learn something that’s not covered in the course that can change your whole approach to things.

I really enjoy the programming courses. They can be endlessly frustrating when my code doesn’t work, but the feeling when you overcome a challenge and/or add some cool new functionality to your project makes it entirely worth it. One of my favourite things to do is to sit down at my desk, put on some good music and code a fun little utility for hours on end.

One of the subjects in my first year was Introduction to Mainframes, which was an eye-opener. Previously, I’d thought mainframes were the huge systems the size of an entire house that only the wealthiest of wealthy businesses used back in the 1970s. I didn’t realise that they were still in active use and development, and it was interesting to learn about the different paradigms between mainframes and desktop PCs.

Our Industry Awareness course was one of the most interesting that I’ve done so far, because it was a completely different type of course. There was no programming, or network troubleshooting or anything like that – instead, each week we would listen to an IT professional from IBM talk about what they did and why they did it. I hadn’t realised just how many different roles were available in the world of IT, and it was a real eye-opener hearing how many of these jobs didn’t exist 5 years ago.

I completed an advanced course in my second year called Computer Graphics and Animation Programming. The time commitment for this single subject was about equivalent to three “intermediate” subjects. I was used to generating computer graphics using off-the-shelf packages such as Blender and Maya, so learning to draw in 3D space using nothing but code (and having to do all my own maths!) was a real challenge.

Although my mentors at IBM work on the same team, they’ve all had different experiences and they have completely different roles. The most impactful thing I’ve learnt from them is that you never stop learning. Over the three months that I’ve been here, the team has been constantly changing and improving our processes as we learn better skills and technologies.

My internship at IBM is much like an extended interview, and I’m lucky to work on a fantastic team, so I hope to keep working here after I graduate. There are also new and innovative startups constantly popping up all over the world, and I think it would be incredibly rewarding and interesting to work for one. This really is an industry that can take me all over the world so the possibilities are endless.

It’s hard to overstate just how much of a difference it can make to your studies when you not only get to apply what you’ve learnt to real world scenarios, but also get to learn new things at work. I’m very fortunate to have this opportunity, as well as to work with such an important company, and a fantastic and patient team who are only too happy to answer my incessant questions and take a genuine interest in my learning.

Bringing Blockchain to the South Pacific

Author: Liz Hampton, Corporate Social Responsibility manager IBM New Zealand When the school year began in February, a new education-business-tertiary partnership also began at Aorere College and Manurewa High School in South Auckland. A cohort of 43 Year 11 students started their P-TECH journey, with a programme that provides for seamless transitions from school to […]